Store Page
Garry's Mod>  Workshop > Sentryandreas's Workshop
This item has been removed from the community because it violates Steam Community & Content Guidelines. It is only visible to you. If you believe your item has been removed by mistake, please contact Steam Support.
This item is incompatible with Garry's Mod. Please see the instructions page for reasons why this item might not work within Garry's Mod.
Current visibility: Hidden
This item will only be visible to you, admins, and anyone marked as a creator.
Current visibility: Friends-only
This item will only be visible in searches to you, your friends, and admins. 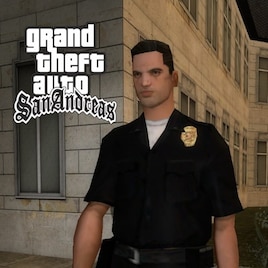 This item has been added to your Subscriptions. Some games will require you to relaunch them before the item will be downloaded.
In 1 collection by Sentryandreas
Sentry's GTA Related SNPCs.

Updates
1/18:Added Medic animations for every law enforcements.
Added the weekend soldiers. (From the mission "Robbing Uncle Sam")
More good quality of sound for M4.
ADDED WEAPON ICONS! You can find them on "VJ Sentry" in Weapon category.

1/24:My updater has been fixed. Thanks for waiting!
For your waiting presents, Added Tenpenny and Pulaski for new SNPCs with new weapon, Desert Eagle.
Tenpenny's animation has been changed into Monk one. (Same with LSPD)
LVPD, LSPD and SAPD Motor Cop's animations have been changed.
Missing sounds fixed for some FBI and SFPD voices.
Weapon damage stats has been changed for a bit.
Desert Eagle has unique damage stat for Player only.
New running animation for Army and FBI.

7/7: Fixed pistol and shotgun animations. Special thanks to Comrade Communist!

9/3: Shotgun's animations and "can't shoot" glitch have been fixed.
Pistol holster feature has been added. normal cops like LSPD now won't pull their pistol until they found an enemy.
-Just like the real SA, Once they pull out their pistol, they won't put it back into their holster.

9/6: Shotgun animation for Tenpenny has been fixed.
Added 2 new SNPCs.
-The Dossier Carrier.
-Security Guard.
*Security Guards can chat each other.

9/7: Fixed the glitch that National Guard can't reload their M4.

9/11: Category has been changed.
You can find some of the main characters on GTA SA Main Characters now.
Added 3 new SNPCs.
Security Captain
-Unused model from GTA SA. Included fully voice lines tho.
Bouncers
-Their MP5 has different fire rates than other Gangs and Cops' MP5.
-(Friendly version only)Because of the in-game's relationship, they're friendly with Italian Mafia and the Syndicate.
Swat Elite Unit.
-Now "SWAT Elite Units" spawner will be working with these guys. They have more health and can shoot their guns with crouching animation.
Added 1 new spawner.
Security Guards.

11/10: Fixed some missing voice glitch for SFPD.
Added new SNPC: The D.A.
New category has been added, you can find the Dossier Carrier on GTA SA Civilians now.

11/24: Weapon collision glitch has been fixed!

2/14: Due to error occuring, Removed weapon-drawing codes for every cops and security guards.

Bean Feb 15 @ 5:13am
@Sentryandreas Hey, you're doing your best, and we appreciate it! Don't stress yourself out too badly!

Sentryandreas  [author] Feb 15 @ 4:29am
@Gangsta SWAT
Because of the animation's name is different, Guess the system can't read the new animation list. To prevent this, downloading Comrade Communist's Integrated HL2 Animation Pack is the only way to fix it.
Sorry for clicking the sub buttons twice times, but for now, It's the only solution I guess.
Sorry about that.

Sentryandreas  [author] Feb 13 @ 6:53pm
@Keitaro This was a weapon drawing codes for every standard cop, but since the last update of VJBase, it's not working anymore. Until I find the suitable codes for them, I disable the codes for them to prevent the errors showing up. Thanks for your reporting, Keitaro! :D