Greenlight > Games > ultrarunaway's Workshop
Greenlight is being retired. For more information on how to submit games to steam, refer to this blog post.
This item has been removed from the community because it violates Steam Community & Content Guidelines. It is only visible to you. If you believe your item has been removed by mistake, please contact Steam Support.
This item is incompatible with Greenlight. Please see the instructions page for reasons why this item might not work within Greenlight.
Current visibility: Hidden
This item will only be visible to you, admins, and anyone marked as a creator.
Current visibility: Friends-only
This item will only be visible in searches to you, your friends, and admins.
Paper Sorcerer
Description Discussions10 Announcements8 Comments248 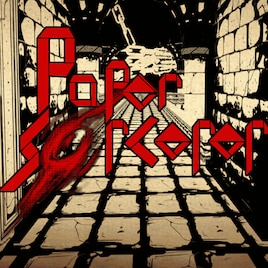 ultrarunaway
Offline
See all 47 collections (some may be hidden)
Kickstarter

View Paper Sorcerer in the store

If everything goes off without a hitch, Paper Sorcerer should be launching at 10 AM PST today, January the 22nd. The initial release is PC only. I've got to figure out the difference in programming for Mac and Linux dll files, will update when those go up. Thanks for all your support everyone, I couldn't have done it without all your help!

If you bought the game already, just sit tight. I'm figuring out a way to send out keys to everybody in a timely manner, forgive me if it takes a little while to figure out, as I've 2000+ keys to send out.

Once again, thanks for all the support. Have fun playing!

I forgot to update here on Greenlight when I updated to v2.1, so today is a double update!

The main changes for v2.1 are: Mass Heal usable out of combat and has proper refresh time, the Puppet and Giant are now trainable, and the Equip menu occasionally not displaying character info has been fixed. Other changes include the chance for status effects to hit and the final boss have been re-balanced, as well as various bug fixes.

In v2.1b I made some minor changes; v2.1 had a zip file issue when it initially went out, so in addition to fixing that, I fixed some doors that rarely soft locked and did some mid-game boss re-balancing.

If you'd like more info about what has changed since the last version, you can find that on the Ultra Runaway Games forum.[www.ultrarunaway.com]. If you've been playing earlier versions, using saves since v1.5 should have little to no bugs. If you'd like to back up your saves, I've documented their location in the readme file.

I'm making progress on the Steam integration and it looks like Paper Sorcerer will be going up on Steam this month! Stay tuned in for updates. Like promised, I'll send a Steam key to everybody that's already bought it that wants one.

Read More
Description
Release date: Available on ultrarunaway.com now!
Paper Sorcerer is a stylish single player turn based RPG focused on strategy, party-building, and environmental puzzles. Fight with the skills and spells you've learned in a battle system that emphasizes strategy over grinding. Assemble a party of monsters and dark creatures to fight alongside you. Explore and solve environmental puzzles to unlock secret paths and find extra loot! A double-sided adventure, an RPG with adventure game elements.

Come on people, it’s only FIVE BUCKS and it’s one of the best overall gaming experiences I've had in 2013. Pick this up; you won't regret it.
- Alex Lucard, {LINK REMOVED}Diehard Gamefan

A powerful sorcerer is on the cusp of dominating the land. A group of heroes bands together and seals him away inside a magical tome. Now as the sorcerer you must escape from this ancient prison and find a way to regain your magical powers using your wits and an array of summonable creatures to aid you. There may be more powerful forces at work as you navigate the dungeons and fight the heroes sent to subdue you...

Key Features
Check out what others have said about Paper Sorcerer:

Rather than focusing solely on leveling and powering-up your characters, Paper Sorcerer focuses on a battle's strategy instead overall strength.
{LINK REMOVED} Awesome Robo

After last year’s glut of first-person dungeon crawlers, things have quieted down substantially. Luckily, we now have Paper Sorcerer to get the ball rolling again!
{LINK REMOVED} Indie RPGs

It's a well-written and deep-enough party-based RPG, on the evidence of the demo at least.
PC Gamer

The turn-based battles are particularly complex. You have to consider the number of turns it will take for spells to burn out, to consider when to play defensively, and to consider switching up your fighting style in accordance with the enemy type.
{LINK REMOVED} Pocket Gamer

I've had a play of that demo and have come away even more impressed by the game’s many systems, tactical mix-ups and branching gameplay than the visuals ever managed.
{LINK REMOVED} Indie Statik

...the game will take as much as 20 hours to complete, but even if you make it to the end, the various character types on offer mean you can replay it an entirely different way.
{LINK REMOVED} Red Bull
< >
248 Comments

Paper Sorcerer has been Greenlit and is now listed in the Steam store. For the latest information, purchase options, and discussions for Paper Sorcerer, please see it on the Steam Store or in the Steam Community.
Visit Store Page
For more details Visit Community Hub
For latest discussions
If you really, really want to, you can continue to the Greenlight page. Information on this page may be out of date, since all the action has moved to the areas noted above.