Store Page
Tabletop Simulator>  Workshop > Cowdog's Workshop
This item has been removed from the community because it violates Steam Community & Content Guidelines. It is only visible to you. If you believe your item has been removed by mistake, please contact Steam Support.
This item is incompatible with Tabletop Simulator. Please see the instructions page for reasons why this item might not work within Tabletop Simulator.
Current visibility: Hidden
This item will only be visible to you, admins, and anyone marked as a creator.
Current visibility: Friends-only
This item will only be visible in searches to you, your friends, and admins. 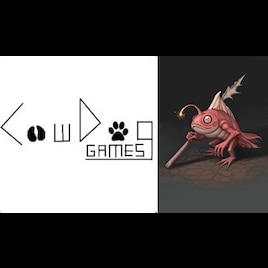 This item has been added to your Subscriptions. Some games will require you to relaunch them before the item will be downloaded.
Description
This is a card game for 2 people. Players place limited cards from a set deck on 2 sides of the field to destroy the other player's defenses. Gather resources to build an army to conquer your enemy. Be careful, you are a tiny faction with limited resources and soldiers. Use your terrain to hide your units or put them upfront to block damage.

Rules:
Each player starts with the same cards in their deck (half of what’s listed in the materials section). Each player also starts with 2 Food. The board is split up into two 3 by 2 grids. Place cards inside an unoccupied location by paying its cost. Cards on the left half can only attack the left side and cards on the right half can only attack the right side. The cards in the front row must be attacked before attacking the player directly. To remove a card from play the total attack value of all your cards must equal or exceed the card’s defense value. If you fail to do this with any card they are reverted back to full health at the end of the turn. Cards in the back row are hidden from the opponent on their turn. Players cannot attack hidden cards without revealing them first. The saboteur can attack hidden cards but it is not considered revealed for other attacks. The first player to lose 20 life on either side loses the game. Each side’s life is kept separate from the other side.

Turn Play:
At the start of the turn, the player reveals all their cards. The player gains food from their Farmers and metal from their Miners. Also, total up the attack value of all cards currently on the board for each half. Any cards you have that reveal enemies now reveal chosen enemy cards. Now the player can spend resources to place cards on the board. Any leftover resources stay for future turns. The player decides how to distribute their total attack across available targets. Enemies in the front row must be killed before attacking the player’s life. Now the player mixes up their back row cards and places them back face down. Keep back row cards on the same side of the battlefield. It is now the next player’s turn. The first player to have one of their life values reach 0 loses the game.

Thanks For Playing,
Cowdog