Store Page
Football Manager 2020>  Workshop > Trường Koo's Workshop
This item has been removed from the community because it violates Steam Community & Content Guidelines. It is only visible to you. If you believe your item has been removed by mistake, please contact Steam Support.
This item is incompatible with Football Manager 2020. Please see the instructions page for reasons why this item might not work within Football Manager 2020.
Current visibility: Hidden
This item will only be visible to you, admins, and anyone marked as a creator.
Current visibility: Friends-only
This item will only be visible in searches to you, your friends, and admins. 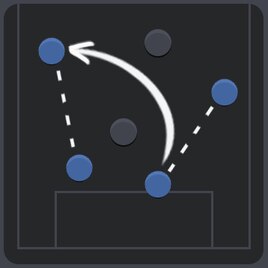 This item has been added to your Subscriptions. Some games will require you to relaunch them before the item will be downloaded.
Description
Sir Alex Ferguson’s 1999 Manchester United Treble Winners.

The treble in 1998/1999 probably remains Sir Alex Ferguson’s greatest achievement as Manchester United manager. The Scottish genius crafted a team that was technically sublime and worked incredibly hard. Lead by the famous class of 92 - the likes of David Beckham, Paul Scholes, Ryan Giggs and Gary Neville - Ferguson’s treble winners set-up in a 4-4-2 that would often look more like a 4-4-1-1 and revert to a compact 4-4-2 out of possession. United were aggressive in all areas of the pitch, constantly looking to win possession.

In attack, United’s shape would transition to either a 3-4-3 or a 3-3-4 depending on the flank they were attacking down. Their main method of chance creation came from wing-play and David Beckham - deployed by Ferguson as a wide-playmaker - was key to this. Manchester United’s depth of forwards and therefore ability to either play to feet or aerially was also really important.

In terms of personnel, Peter Schmeichel’s aggressive distribution out to Man Utd’s full-backs - usually Dennis Irwin and Gary Neville - was a defining tactical feature of Manchester United’s treble winners. The full backs were not only key in starting attacks but also their positioning affected the attacking shape and thus were important in retaining balance. In terms of central defence, United’s go-to pairing was Jaap Stam and Ronny Johnson. The two formed a classic stopper cover partnership, with Stam as the stopper and Johnson on the cover. Stam was the perfect stopper, he was tactically intelligent which meant he wouldn’t go careering after the ball but instead would identify the danger and move to deal with it whilst Johnson would support and look to either clean up after Stam or intercept.

Another defining feature of Man Utd’s 1998/1999 team was the way Ferguson used his wide talent. On the right, David Beckham was deployed as a wide-playmaker - often looking to drift inwards and deliver one of those trademark whipped crosses , whilst Gary Neville keeps himself available on the overlap. On the opposite flank, Ryan Giggs was much more of a traditional winger who’d look to beat his man with pace and trickery. Centrally, Roy Keane was arguably the best ball-winning midfielder in world football at the time and Paul Scholes remains England’s greatest ever central midfielder.

Manchester United had an embarrassment of riches in terms of strikers in 1998/1999 , Andy Cole and Dwight Yorke were very much the first choice strikers - but famously Teddy Sheringham and Ole Gunnar Solskjaer were reliable options off the bench.
Popular Discussions View All (1)

How successful you are applying this tactics?
Trường Koo
< >
9 Comments

ThinhTran Feb 12 @ 9:33pm
Your tactic is great, can you give your idea when facing big teams like Liverpool, Barcelona...

Sugen Jan 26 @ 2:41am
beast tactic. no training and won my first game with 5-0 (with united standard team no transfers)