Greenlight > Games > Erik Asmussen's Workshop
Greenlight is being retired. For more information on how to submit games to steam, refer to this blog post.
This item has been removed from the community because it violates Steam Community & Content Guidelines. It is only visible to you. If you believe your item has been removed by mistake, please contact Steam Support.
This item is incompatible with Greenlight. Please see the instructions page for reasons why this item might not work within Greenlight.
Current visibility: Hidden
This item will only be visible to you, admins, and anyone marked as a creator.
Current visibility: Friends-only
This item will only be visible in searches to you, your friends, and admins.
Robot Roller-Derby Disco Dodgeball
Description Discussions15 Announcements15 Comments619 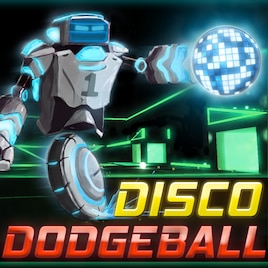 Erik Asmussen
Offline
See all 35 collections (some may be hidden)

It's finally happening! Thanks a ton for all of your support in getting me to this point. The game can now be purchased for a 15% discount on its Steam Store Page. Hope you all enjoy it, and please let me know what you think so I can keep improving the game!

If you bought the Beta version of Disco Dodgeball via the Humble Widget (or received a copy as a gift), you can now download and play the Steam version!

Go to your Humble Home Page[www.humblebundle.com], locate the game link beneath Other Purchases, and you'll see your redeem link.

There's another link there that you can send to a friend, and then they'll get their own key and will be able to join you!

Everyone else will be able to play it when it launches into Early Access on March 28 - this Friday!

Disco Dodgeball is a first-person dodgeball game set in skate park / dance club arenas with jet-powered robots and a monster truck announcer. It's also one of the most insanely fun multiplayer experiences you've ever had.

The game combines skillful projectile warfare and fast, fluid motion. Launch yourself off ramps, catch dodgeballs in mid-air, and dunk them down upon the opposing team. Master several special skill shots - like rebounds, alley-oops, and long-distance aerial kills - for extra points and bragging rights.

Each combat arena is a multi-level, neon-drenched playground with a ton of ramps and jumps that allow you to fly around at will. Bright laser lights pulse to the amazing electronic soundtrack and create an intense audiovisual experience.

Best of all you can play this game RIGHT NOW! Try the free alpha, or download an Early Access copy at www.82apps.com/DiscoDodgeball. Purchase a copy of the game now and I will send you two Steam keys if/when this is Greenlit!
Popular Discussions View All (15)

The big Disco Dodgeball 'To Do' List
Erik Asmussen

Digital Deathsquid Jul 17, 2014 @ 5:08am
want. now.
I've played an Alpha Trial version on Kongregate.com and was coming here to greenlight the game, but it's already been greenlit. AWESOME.

Got my nickname reported Mar 28, 2014 @ 11:04am
sucks i never got this in ur two reddit giveaway i really would want it but i failed twice and never sign up reddit till after it was over sucks im sad

Robot Roller-Derby Disco Dodgeball has been Greenlit and is now listed in the Steam store. For the latest information, purchase options, and discussions for Robot Roller-Derby Disco Dodgeball, please see it on the Steam Store or in the Steam Community.
Visit Store Page
For more details Visit Community Hub
For latest discussions
If you really, really want to, you can continue to the Greenlight page. Information on this page may be out of date, since all the action has moved to the areas noted above.