Store Page
Arma 3>  Workshop > -|ODK|- IlSigSmoke's Workshop
This item has been removed from the community because it violates Steam Community & Content Guidelines. It is only visible to you. If you believe your item has been removed by mistake, please contact Steam Support.
This item is incompatible with Arma 3. Please see the instructions page for reasons why this item might not work within Arma 3.
Current visibility: Hidden
This item will only be visible to you, admins, and anyone marked as a creator.
Current visibility: Friends-only
This item will only be visible in searches to you, your friends, and admins. 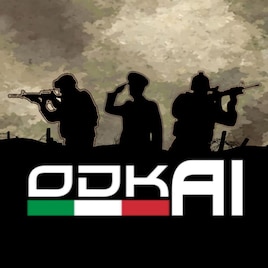 This item has been added to your Subscriptions. Some games will require you to relaunch them before the item will be downloaded.
Description
RELEASE 1.3.7.2

ODKAI is created by IlSigSmoke & RedCharlie. It has been developed to work mainly in multiplayer, but it now works in singleplayer too.
The goal of this Mod is to create a more realistic AI behaviours and communication.
We want to create a commander who will give orders in a more realistic way to the units at his disposal, based on the information collected and communicated by the faction, that can't know what happened to an armored vehicle that had stopped replying, sending a reasearch team to probe the area around the last squad's actual.
Squad leaders that report his position and truly send and receive information about enemy locations and forces. Soldiers that can use freely almost every game assets, that throw a smoke grenade considering the wind force and direction, that can steal your vehicles, and they will.
Only one HQ can be added in the game (in editor) and it will command only AIs from its allied faction.
This mod doesn't spawn units.

-|ODK|- IlSigSmoke  [author] May 17 @ 2:31am
Mike99imp thanks, you can decide the percentage of using Smoke granades by CBA settings

Mike99imp May 16 @ 8:31pm
LOVE YOUR MOD! It seem after an update with the mod the AI is spamming smoke grenades. If they have them they will use them in every engagement. Could you take a look at this?

TMZulu May 9 @ 2:32pm
Is there a public Github or something available for this mod?

-|ODK|- IlSigSmoke  [author] May 7 @ 8:59am
Thanks @vit,
I'm sorry but with new update Can't work with LAMBS,becouse i create my own danger.fsm

vit May 6 @ 11:07pm
ty for update very good mod for ai. btw with new update not work with LAMBS danger? or they can work togher?

The Big Dog Apr 26 @ 1:41am
with this recent update it would now conflict with LAMBS danger correct?