Store Page
Garry's Mod>  Workshop > Titanicfan30000's Workshop
This item has been removed from the community because it violates Steam Community & Content Guidelines. It is only visible to you. If you believe your item has been removed by mistake, please contact Steam Support.
This item is incompatible with Garry's Mod. Please see the instructions page for reasons why this item might not work within Garry's Mod.
Current visibility: Hidden
This item will only be visible to you, admins, and anyone marked as a creator.
Current visibility: Friends-only
This item will only be visible in searches to you, your friends, and admins. 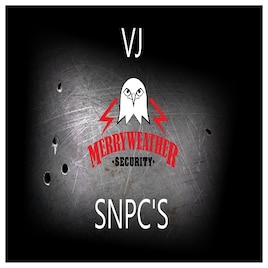 Titanicfan30000
Offline
See all 285 collections (some may be hidden)

This item has been added to your Subscriptions. Some games will require you to relaunch them before the item will be downloaded.
Description
"Merryweather is a private military and security company with over $10 billion of taxpayer's money in US government contracts to its name". - A website in Grand Theft Auto 5

Now I know that there is already a GTA 5 pack of snpcs with both Gruppe Sechs and Merryweather on the workshop, but I wanted to make a simple standalone addon just with Merryweather so here they are!

Features:
- Friendly and Hostile variants, Same for the squads
-Random bodygroups and gear such as hats, shirts, pants,etc.
-645 different voice lines!
-each character has their own respective voices from the game
-Some units can help by healing each other, the player and player allies
-3 different squads of 4 units
-Can throw grenades and toss enemy ones back
-Can also use the SMG1's underbarrel grenade launcher, thanks to VJ Base update
-Can follow the player
-Very agressive
-Very accurate for more deadly firefights
-Decent for my first mod
-Perfect for npc battles or whatever you wish!

P.S
-I fixed some players not being able to spawn them and responding with a error in the console
- If you come across any problems let me know so that I can try to fix them
AND MOST IMPORTANTLY HAVE FUN

Credit:
Rockstar Games - For their models of the characters, voices and the logos.
DrVrej - For their wonderful Vj base , Sounds and Weapons.
Human Grunt - For taking time porting all the models.
Sentryandreas - For inspiring me to take my chance making this.
☭Comrade Communist☭ - For his simple, but very smooth and great animations.

Disclaimer:
-They also do not use the CSS weapons, those were just for posing
< >
9 Comments

engineer gaming May 18 @ 5:23am
I get a VJ base error every time I try to spawn them

Titanicfan30000  [author] Dec 7, 2019 @ 11:14am
@☭Comrade Communist☭ Forgive me Comrade for not including you, cant forget about the man who made the animations!

☭Comrade Communist☭ Dec 7, 2019 @ 6:45am
Please indicate me in the credits as the author of the animations that you used, thanks.

i just hope they are not too strong :D
and thanks for not thinking I plagiarized your GTA addon!