Store Page
Conan Exiles>  Workshop > Agathorn (SH)'s Workshop
This item has been removed from the community because it violates Steam Community & Content Guidelines. It is only visible to you. If you believe your item has been removed by mistake, please contact Steam Support.
This item is incompatible with Conan Exiles. Please see the instructions page for reasons why this item might not work within Conan Exiles.
Current visibility: Hidden
This item will only be visible to you, admins, and anyone marked as a creator.
Current visibility: Friends-only
This item will only be visible in searches to you, your friends, and admins. 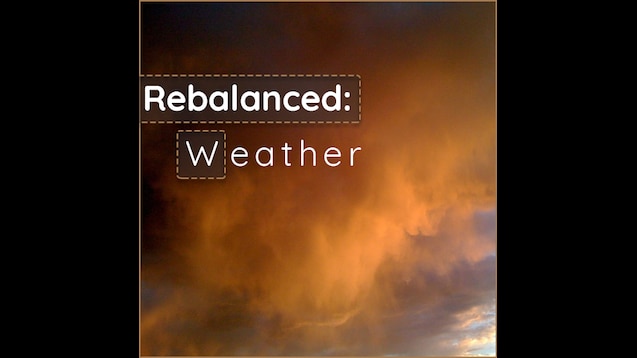 Agathorn (SH)
Offline
See all 163 collections (some may be hidden)

This item has been added to your Subscriptions. Some games will require you to relaunch them before the item will be downloaded.
Description
MOD ID
1927019439

Seasons
Rebalanced Weather introduces a new system to the game world; Seasons. Seasons change over time and each season has a slightly different effect on the world that varies by the climate of the area. For example, during the cold season it will snow in the temperate climates rather than rain.

There are three seasons that cycle as follows; Mild -> Hot -> Mild -> Cold (repeat)

In addition to weather changes, the Hot and Cold seasons have a small chance of an "Extreme Temperature Event". When these occur the temperature will rise (Hot season) or fall (Cold season) by a noticeable amount.

Debug HUD
For those who want to dig deeper, or do some debugging, RW2 also has a debug HUD that will indicate current status on many of the underlying state variables in real time. To open it use the console:
ke * RW_Debug
To close it:
ke * RW_CloseDebug

Known Issues
For some players, custom settings don't save and revert to defaults on load.

Caswallon2 Oct 22 @ 5:43pm
Puzzling... I hate to say this but the settings I have used for about 6 weeks of real time just reset tonight for no readily apparent reason....
Hubris Daemon must be out to get me as soon as I think I am on to something it shoots me in the foot! Sorry!
But it still lasts several weeks trying to get the Settings to save alongside other MCP configurable mods...

Agathorn (SH)  [author] Oct 22 @ 9:01am
@Caswallon2 well my early thoughts were that the bug was something to do with how I use the Control Panel mod, but others have reported that settings don't save even when using RW2's own settings panel.

Caswallon2 Oct 22 @ 3:19am
@BottleOrum. OK One further thought just occurred to me.
I notice when I click save in RW2 I get no notification of a save. However before I close Mod control panel if I go to SandstormEx and use the Save button there - Both Mods settings save! Play around with that maybe? (Assuming you also have SandstormEx)
If that works (as it does for me) @Agathorn does that give any hints where the occasional discontinuity in the save settings might be? I mean if RW2's is a bit flakey but the code for another mod gets Mod Control Panel to save all tweaked settings in a session is that a clue my good sir?

Bottle0rum Oct 13 @ 6:39pm
@Caswallon2 That didn't work for me. In fact, It took nearly 20 tries before the settings would save raising the warm climate rain chance for mild seasons, even with freeze checked. It's finicky at best. It literally saves EVERY other option except that one. But it doesn't really save it. All I have to do is log out, and when I log back in, EVERY setting is back to default. No matter what I do. And this is on a dedicated server which is not being rebooted at all. It just refuses to save the settings to the server. Not only that, some players report not seeing rain, when standing next to me, and it's raining on my screen. This mod has really good potential, but is in terrible need of simply being updated to work with the new devkit.

Caswallon2 Oct 13 @ 12:15pm
BottleOrum. As a work around to the seasons/settings not saving BUG try checking he "freeze season" box then saving. This seems to make sure the settings "Take" and survive a reboot of the server. it may mean you need to manually advance the seasons, but that's a far less onerours task then re doing ALL the settings after every reboot... Personally after i learned the "trick" of enabling the Freeze season for the save. Even is I Uncheck that now the tweaked settings survive the server rebooting
Good luck!

Bottle0rum Oct 13 @ 6:21am
As an addendum, the mod settings do not save between play sessions.

Bottle0rum Oct 12 @ 1:21am
This mod sort of works with the Isle of Siptah. The only settings that work are the ones for the Warm climates. So the only thing that ideally would be needed to make it compatible with Siptah is to possibly add the chance for thunderstorms to occur in Warm climates. The ash is out of place, but can be turned off, and for the original map, the same can be done with thunderstorms.

Viper Oct 3 @ 3:56am
Great to see this back, ANy chance you can make it Siptah compatible?

Caswallon2 Sep 22 @ 12:26am
Working fine for me.
Also works in conjunction with Severe weather mod (if loaded after that one) which is double your funzies if Survivals your thing :)
< >