Store Page
Divinity: Original Sin 2>  Workshop > Cheshirecrow's Workshop
This item has been removed from the community because it violates Steam Community & Content Guidelines. It is only visible to you. If you believe your item has been removed by mistake, please contact Steam Support.
This item is incompatible with Divinity: Original Sin 2. Please see the instructions page for reasons why this item might not work within Divinity: Original Sin 2.
Current visibility: Hidden
This item will only be visible to you, admins, and anyone marked as a creator.
Current visibility: Friends-only
This item will only be visible in searches to you, your friends, and admins. 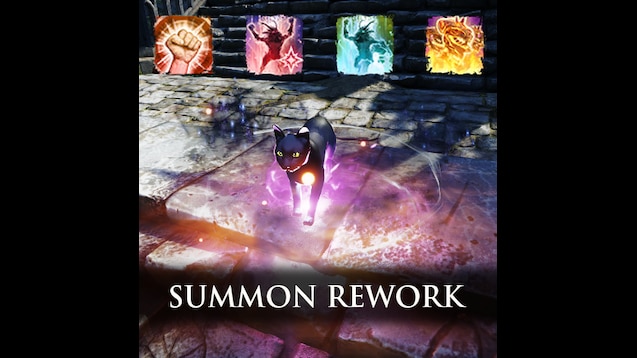 This item has been added to your Subscriptions. Some games will require you to relaunch them before the item will be downloaded.
In 1 collection by Cheshirecrow
Vincent H.L's Collection

9 items
Description
This is the core engine of Summon Rework and can be used stand along. When enable other add-on series please keep the core on top order.

I realised that unless I wipe all infusion modifiers and move them to a different mod, there will always be bugs with gift bag on.

You can also find other compatible add-ons to further customize your adventure from here:
https://steamcommunity.com/sharedfiles/filedetails/?id=1925749810


FEATURES
Summon Rework will re-balance summoning school and make it more fun. The core contains all data, which means by adding other packs, you can switch your own desired tweaks without damaging your save. (For instance disable boss fights will remove all boss encounters but keep unique items that you earned)


MECHANICS
Will influence all summons including hostile ones. After reaching a certain level, new skill books can be bought from vanilla vendors or dropped from loot.
1. All pet summons will have infinite time to stay with you, and they all have their unique uses.
2. As you level up summoning school, summons' critical chance will increase.
3. Blood infusion lowers all resistance but increases physical resist stats.
4. You can infuse all your summons.
5. Late-game infusions have been recreated, Necro Infusion (previously Shadow Infusion)& new Warp Infusion spells will suit your summon who does none Physical damage.

Rain of Feebleness at lv1, can reduce enemies' resistance, and apply your weapon effects.

Independence at lv2, can use AI to control your summon or companion, use again to cancel.

Rally Portal at lv2, used to call back your ally or summons in battle.

Chain Ethereal at lv9, cause damage to multiple targets and apply weapon effects.

Totem Formation at lv16, allows you to summon 4 totems at once, suits those who wanted to play totem rush.

1. Dimensional Bolt & Ethereal Storm now do piercing damage but they only scale with player level (can trigger weapon effects, so you don't have to be a mage summoner anymore, anyone can learn to be a summoner. )

Note: since Dimensional Bolt is now special skill instead of Summoning, you can not choose it from character creation, but if you use default skill set, it will be there, even it looks like only two skills available.

2. Supercharger will give your summon an extra turn after current turn ended.
3. Planar Gateway won't cost source point to use, so do play with it.
4. Inner Demon will inflict piercing damage and apply weapon effects.
5. Summon totem can now place 2 totems in one turn, they last longer but cool down changed to 3 turns. ( Now the real totem revolution comes)
6. Cannibalize now also increases 15% of your damage for 2 turns.


OTHERS
Many tweaks in this mod changed existing summon or skills, so other mods modified the same stats will have compatibility problems. Therefore, adding new things to the game won't have any issue, and move this mod under other mods may overwrite their stats.


Great thanks to rOy for noise sound fixes, please check the fix via this link (and smash that like button):
https://steamcommunity.com/sharedfiles/filedetails/?id=2267201203

PINNED: The design ideas (why I designed things this way)
Cheshirecrow
< >
68 Comments

kmcsjr Aug 19, 2021 @ 6:03pm
Hey - Summoning is still my favorite part of the game. Restarting for the way too manyth time and finally reading mod descriptions. This say the condor improves party accuracy and range. It doesn't seem to. DO you think its another mod that messes that up, or am I missing dsomething? Thanks

INTERPLANETARYNINJAASSASSIN Apr 15, 2021 @ 3:19am
Is there any chance you could make the reworked infusion visuals a standalone mod? They're so much better than the ridiculously obscuring visuals of the vanilla infusions. I'd love to be able to use them in conjunction with pet power without breaking things.

Getsugaru Mar 3, 2021 @ 10:25pm
Is this mod compatible with the mod "Black Cat +[Definitive Edition]"? Asking because I really want the cat to follow/be summoned by Sebille, but since I am not playing as Sebille as my PC (Custom Undead), there's no way for me to reach and recruit her before meeting the cat...

kmcsjr Jan 19, 2021 @ 5:15pm
Hi This is one of my favorite mods. I'm wondering if you would consider 3 things:
1) the ability to use source based infusions on summons that aren't just the incarnate champion
2) Infusions with no visible change to the target. This would allow buffed Characters to look like themselves
3) Oil, Cursed Oil, Cursed blood etc infusions.
or. if I were going to delve into modding, would these be feasible as a first project?
Thanks

Mario Underground Jan 10, 2021 @ 3:57am
there seems to be a compatibility issue with the divine talents mod from Larian. if you have the mod active along with your mod and then restart the game. some skills change back to their default like dimension bolt

Cheshirecrow  [author] Jan 3, 2021 @ 11:13pm
@rOy Oh, Thank you so much for creating a fix for the sound problem, I had problem changing it and forgot about it after. Sorry I am using a cheap head set without any bass.

May I put your link in the page just so people can find it? I'll fix other thing up and add more contents later.

EEEEE Jan 1, 2021 @ 1:27am
I'm using this mod in conjunction with the Occultist mod, and I can't seem to get the permanent summons part of the mod to work. Can someone help please?