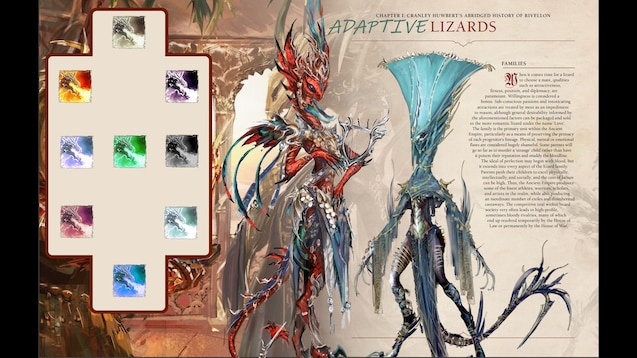 With Adaptive Lizards, you can now customize your Lizard Racial ability to be better suited for whatever build you are playing with, whether it be an elemental mage, a warrior, or a rogue.

Note
This mod was made as a collaboration between Feenex and I. Feenex did most of the effects work and helped to brainstorm some of the skill ideas.

Switching Racial Skills
With Adaptive Lizards, each of your characters will be given a mod settings book after character creation (or when loading a save if you lose it or add it to an existing save). This book is written in Ancient Lizard script, and when read will allow the reader to learn the secrets of a Lizard House and change their racial ability's affinity. Only living Lizards can learn the secrets of this tome (sorry Undead Lizards).

Skill Variants
This mod adds 8 new variants for Dragon Blaze and is fully compatible with Feenex's Battle Packs and Odin's magic school Overhauls (Compatible does NOT mean required!). All of these skills scale with level only, so you can use whichever one fits your needs.

The base Lizard Racial ability that every lizard starts with, now also grants Fire Immunity for 1 turn.

If used with Odin's Hydro Overhaul, will apply Hypothermia to Chilled and Frozen targets.

If used with Odin's Hydro Overhaul, will apply Drowning, along with Hypothermia to Chilled and Frozen targets.

If used with Odin's Geo Overhaul, will apply Spored to targets hit.

If used with Odin's Geo Overhaul, will apply Oiled to targets hit.

If used with Odin's Aero Overhaul, will apply Conductive to targets that are stunned or who become stunned from this skill.

Grants 20% lifesteal for 1 turn, sets Bleeding and leaves a Blood surface. If the target is already Bleeding, this skill will also apply Decaying.

Does Shadow damage and leaves Cursed Smoke clouds in its wake.

If used with Feenex's Battle Pack Expanded, will increase the user's rank of Insanity.

Does Physical damage, sets Knocked Down and clears surfaces in its wake.

Grants Elemental Tolerance and slowed immunity for 1 turn and does Chaos damage.

Sets Elemental Sensitivity on Enemies hit and leaves a Cursed Oil surface and poison clouds in its wake.

If used with Odin's Spectre Class, will apply Agony to targets hit.

Book of Origins
Frasdoge's Book of Origins mod, which is now compatible with Adaptive Lizards.
Thanks Frasdoge!
Popular Discussions View All (3)

Malchezzar  [author] Mar 18 @ 12:35pm
@OmegaSai It's been a while since I was actively playing or modding but it was compatible, and built to be compatible with Odin's mods from the get go.

OmegaSai Mar 17 @ 1:17pm
Is this mod not compatible with Odins mods? Ive tried so many time to get it to work but it just wont

Relzyrx Feb 1 @ 10:50am
Hi! I'd like to talk about the possibility of incorporating the Dragon's Blaze Alternative VFX mod into Adaptive Lizards. I have permission from MrCool to approach you about this, permission to share chatlogs to prove it, and I'm willing to pay to make it happen.

. Jan 30 @ 5:09am
Damage on a lot of these needs reeled in some. Dragon Shout does 95% the damage as Battle Stomp for half the AP cost. Sure, the range is shorter(7m vs 10m) but that's still too much damage for it to be considered balanced. Honestly, all of them could have their damage scaled back by at least 25-30% given that you've added extra affects. This racial ability is meant to be something cheap for you to use when you've only got 1AP left, it just sucked that in vanilla you were limited to fire only. This mod adds great variety to lizard builds but it's just too powerful for what it's meant to replace.

X. Crow Nov 24, 2021 @ 1:41pm
Any way to make the cone work with Dragon Blaze Alternative FX mod? Nice work on this, 4 player party with this has been proving to be quite fun!

Shadow1474 Jun 3, 2021 @ 10:08am
@lechkingofdead - Sometimes you have to launch Divinity and wait a couple minutes while in the menu, then open the mod menu. For whatever reason, Larian thought it was a good idea to make the game copy its mods from the Steam Workshop folder to the My Documents folder for the game.

If that still doesn't work for you, you can go to where Steam is then steamapps\workshop\content\435150\1923887113, after that, copy the Adaptive Lizards file and paste it to \Documents\Larian Studios\Divinity Original Sin 2 Definitive Edition\Mods

Shadow1474 Apr 7, 2021 @ 10:34am
If possible, your breath spells should state in the descriptions that they add Odinblade's effects if the appropriate mods are installed. In a game like Divinity, it helps to know exactly what a spell does at any time, you know?

The Worst Mar 28, 2021 @ 9:26am
@Getsugaru That would be awesome! Imagine after a realm shattering battle in Skyrim, your dragonborn once again awakens to find himself in shackles in a strange and foreign land
< >