Greenlight > Games > Soda Drinker Pro's Workshop
Greenlight is being retired. For more information on how to submit games to steam, refer to this blog post.
This item has been removed from the community because it violates Steam Community & Content Guidelines. It is only visible to you. If you believe your item has been removed by mistake, please contact Steam Support.
This item is incompatible with Greenlight. Please see the instructions page for reasons why this item might not work within Greenlight.
Current visibility: Hidden
This item will only be visible to you, admins, and anyone marked as a creator.
Current visibility: Friends-only
This item will only be visible in searches to you, your friends, and admins.
Soda Drinker Pro - Full Version
Description Discussions14 Announcements9 Comments463 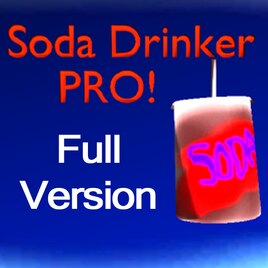 Hi Everyone!
I've got some super exciting news! We just announced our launch date on Xbox One and Steam!

We are also having a launch party at Microsoft in Cambridge MA for the game! If you are interested in going make sure to RSVP here!
Here's the link![www.eventbrite.com]


Also we'll be at PAX East this year! We have been getting lots of folks asking how they can cosplay being a Bonus Soda! If you are interested in joining the Bonus Sodas in cosplaying at PAX East 2016 we made a special list for people who are interested! Just fill out this form and we'll get you the details!

We will also be on a panel at PAX East on humor in Games! With the devs from Goat Simulator, Adult Swim Games, Monkey Island, Sam & Max, comedian Lamont Price and more! This is going to be Saturday evening at 7 pm in the Bobcat Theatre!

Tons of other crazy stuff is in the works! I'll have some big updates soon so stay tuned!

Thanks again for all your support in the world of simulated Sodas!

Who could it be? Check out the video here!

Now you can experience Sodas in exotic locations such as
Press Quotes
"It exists somewhere in between, straddling the line of abstract reality, and detailed simulation"
- Game Informer

"If only there was a way to sip a refreshing cup of soda at the beach, in a park or in space without all the risk. Now you can, with Soda Drinker Pro, an exciting indie game poised to take the FPS (First-Person Soda) genre by storm."
- Mashable

"With over 100 levels, Soda Drinker Pro is more than a simulator. It’s a journey of self-discovery through corn syrup, as though Martin Heidegger’s Being and Time were a soft drink"
-Nerdfit

"It Will Probably Change Your Life"
- Complex Magazine

Thank you for making this, this is just perfect!
- {LINK REMOVED}Indie-Impressions.com

"As you play Soda Drinker Pro, you go from thinking "WTF?" to a gradual acceptance of this unnatural world you've stepped into. I half expect to bump into David Lynch..."
- CNet

You Need Soda Drinker Pro in Your Life!
- Indie Statik

"The true genius of this game lies in its plot. Finally something that isn't absurd, but rather a story we can all relate to. The main character was extremely like-able. I have not been this attached to a character that doesn't even talk since Portal. Simply amazing. 5/5. game of the mother F$@K#n year!"
- IIA0PSW

"Soda Drinker PRO!, the finest soda-drinking simulation ever, is here and nothing will ever be the same"
- Kill Screen

"The world is totally open-ended. You can walk to the left or the right. You can even go front and back. All you have to do to win is drink your soda. Few

"The drinking game you must play"
- Airborn Gamer

"Humanity has accomplished a great deal in its relatively brief time on this planet. So it's refreshing to see we've even managed to wield technology so

advanced that we can properly simulate the act of walking around and drinking a soda."
- Phoenix Newtimes

"I’m not entirely sure you can call Soda Drink Pro a game, but it’s still something you should play"
- Platform Nation

Soda Drinker Pro - Full Version has been Greenlit and is now listed in the Steam store. For the latest information, purchase options, and discussions for Soda Drinker Pro - Full Version, please see it on the Steam Store or in the Steam Community.
Visit Store Page
For more details Visit Community Hub
For latest discussions
If you really, really want to, you can continue to the Greenlight page. Information on this page may be out of date, since all the action has moved to the areas noted above.