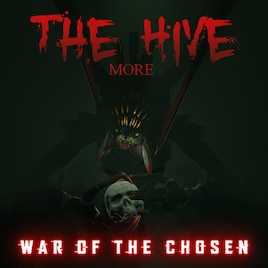 XCOM 2: War of the Chosen - Tactical Legacy Pack
Required items
This item requires all of the following other items
[WOTC] The Hive
Created by

MrShadowCX
Offline
See all 1110 collections created by MrShadowCX and other people (some may be hidden)
You need DLC to use this item.

55 items
Description
The Hive More is going to over time add much more to The Hive Mod.
This mod will NOT work on its own and requires The Hive base mod to work.

Right now, this adds new versions of existing missions that you'll have Hive show up in, in greater numbers.

Hive Ambush
During Ambush Missions, you can now have Chryssalids like Chameleons and Infectors show up stalking around the Abandoned Cities, looking for Lost or your soldiers to feed on.

Swarm Retaliation
In the Swarm Retaliation mission, you may now have to protect many Civies from a swarm of Hive that have attacked the Resistance Heaven. You still need to rescue only 6 to keep the territory but the more you save, the more you build monthly income for that territory. The more Civies you lose, the larger the Hive threat you need to deal with.

Hive Terror
Hive Terror missions work much like Retaliation missions only you do not have to directly move into a circle to save Civies. Its a pure SWEEP THE HIVE mission. The faster you kill all the Chrys, the faster you complete the mission. Allow them to kill Civies, and you'll be fighting longer or dying faster, up to you ;)

Extract Advent Crates
Now youll have a chance to run into a Swarm that has ambushed Resistance escorting Civies though the area and have stumbled onto the Advent Resource Depot. Get the crates and help protect the resistance and Civies in the area.

Avenger Base Defense
Like the base game Avenger Defense mission, only all of the initial starting enemies will be Hive. Be ready for a mad rush of Chryssalids!!

Gather survivors
Instead of Lost and Adv. Youll now have Lost and Hive Gestation Pits to deal with. These pits do not move but spawn many Chryssalids looking for a good meal. XCom, the Lost... does not matter.

Hive Ripper Swarm
In a Hive Ripper Swarm mission, you'll run into just that. A large Ripper Swarm. Early game it will be all Rippers so brings lots of bullets, fire and AOE weapons to take out large numbers quick. Mid to late game, you may have a Brood Mother or even a Hive Guard show up to see why you're squishing all the little Rippers ;) There is also now (just for this mission) a new type of Ripper called a Needle Ripper. Like the Ripper you can call in with the Brood Gauntlet that can be used as a living explosive, the Ripper Swarm can also have some of these mixed in. They can both make things harder or easier for you. If you can kill enough of them in close proximity of each other... you may set off a chain reaction killing multiple Rippers. These Needle Rippers have 1 more HP than other rippers (max 5) but a much higher defense and dodge factor. Cant have you killing them too easily now :)

IF ANYONE IS HAVING ISSUES NOT GETTING THE MISSIONS TO WORK RIGHT
delete mod, resub, clear config and start new game

silverleaf1 Aug 14 @ 3:35pm
@MrShadowCX Question: Are there any plans to make Bio Division 2.0, More Robots and The Hive More fully compatible with the new strategy overhaul mods. I noticed that The Hive More requires an edit and More Robots requires a bridge.

samsockeater Aug 14 @ 10:31am
the game kept getting stuck on the ripper swarm mission - in the fancy cutscene things of annoyance, any ideas what can cause this or is that run just doomed?

silverleaf1 Aug 12 @ 8:52pm
@MrShadowCX What is the edit to make this compatible with the new strategic overhaul mods?

EQandcivfanatic Jun 28 @ 6:07am
What is the force complete objective commands for this mod? I'm currently stuck in a terror mission wherein I've rescued all the civilians, cleared the map, but it still has the Alien Activity turn, with no sign of any actual aliens. It says to "Stop the Chrysalid Advance." What is the force complete objective for that, so that I can move on?

silverleaf1 May 29 @ 6:09am
@MrShadowCX I started a new campaign after checking the files in Steam and deleting the config folder. I am using the same mods as before except for The Hive and The Hive More. I use the Marathon and Mission Mania mods so despite only having magnetic weapons I have played a lot of missions and, so far, have had no issues at all. In my previous campaign I only had freezes during missions that were from The Hive More or had sitreps involving the Hive. I do have over 150 mods active so it might be hard to determine for sure what the issue was but so far this campaign is going smoothly.

silverleaf1 May 24 @ 1:47am
@MrShadowCX Question: Can the Hive Queen, other rulers or the Chosen show up on ripper swarm missions? A fun, but very long, mission. Starting position counts for a lot.

silverleaf1 May 22 @ 9:40pm
@MrShadowCX I am only using mods from Creative Xenos that add missions. I had a hive swarm mission. For some reason the civilians were never attacked. This is in a freshly started campaign. The mission had one Advent MEC, one Stun Lancer and the rest were Chryssalids.

Shannon Apr 18 @ 5:03am
@Strifent The Sitreps are the following: