Store Page
Planet Coaster>  Workshop > AxmGames's Workshop
This item has been removed from the community because it violates Steam Community & Content Guidelines. It is only visible to you. If you believe your item has been removed by mistake, please contact Steam Support.
This item is incompatible with Planet Coaster. Please see the instructions page for reasons why this item might not work within Planet Coaster.
Current visibility: Hidden
This item will only be visible to you, admins, and anyone marked as a creator.
Current visibility: Friends-only
This item will only be visible in searches to you, your friends, and admins. 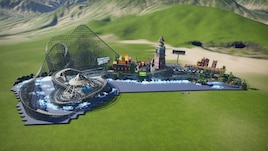 AxmGames
Offline
See all 6 collections (some may be hidden)
You need DLC to use this item.

This item has been added to your Subscriptions. Some games will require you to relaunch them before the item will be downloaded.
Description
Welcome to the quaint breezy Town Of Seascape Lighthouse Town Village, Home of the Seaside Surfer Wooden Coaster.

The Village was founded in 1952 after the lighthouse was purchased by the town folks, at which point, they began a complete extensive restoration makeover on the lighthouse.

After taking three years to complete the renovation, in 1955, construction began on the Seaside Surfer wooden coaster which finally opened in the Summer of 1957 on July 4th. The Island Pier opened one-year later.

The event drew thousands and thus began the history of the Seaside Surfer which became well know along the East Coast of America for the water soaking coaster ride as it traverses through the underground tunnel, and across the beach shore-line, as it battles the rough waves that are constantly crashing in the path of the Seaside Surfer.

For more images and information about this blueprint, visit the official website https://www.axmgames.com/sslh
< >
2 Comments