Greenlight > Games > Wyldekarde's Workshop
Greenlight is being retired. For more information on how to submit games to steam, refer to this blog post.
This item has been removed from the community because it violates Steam Community & Content Guidelines. It is only visible to you. If you believe your item has been removed by mistake, please contact Steam Support.
This item is incompatible with Greenlight. Please see the instructions page for reasons why this item might not work within Greenlight.
Current visibility: Hidden
This item will only be visible to you, admins, and anyone marked as a creator.
Current visibility: Friends-only
This item will only be visible in searches to you, your friends, and admins.
Graywalkers: Purgatory (Turn-Based Post-Apocalyptic RPG)
Description Discussions5 Announcements42 Comments377 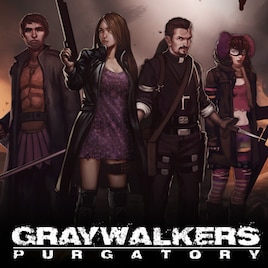 Entropy
Offline
See all 67 collections (some may be hidden)
Kickstarter
Recent Announcements View All (42)
Graywalkers (turn-based strategy RPG) up on the Steam store!
January 29, 2019 - Entropy

You can now search for Graywalkers (turn-based strategy RPG set in a supernatural post-apocalyptic world) in the Steam store: https://store.steampowered.com/app/1003370/Graywalkers_Purgatory/

https://projektindie.com/2018/01/08/walk-the-line-between-darkness-and-light-in-graywalkers-purgatory/
"Walk the Line Between Darkness and Light in Graywalkers: Purgatory"

Read More
Description
Release date: Early Access moved to end of the Year
Graywalkers: Purgatory is the first in a series of Emergent, Strategic, and Tactical Turn-based 3D Role-Playing Games set in a stylish supernatural post-apocalyptic world, where parts of Heaven, Hell and Earth have merged together in an event called "The Rupture".

The game is inspired by a combination of features from classic XCom, Jagged Alliance, and Fallout, then mixed in with the Emergent Strategy features of Mount & Blade. Together, this creates a unique RPG experience that is Graywalkers: Purgatory.

In this game, you play the prophesied leader of the Graywalkers, 36 Hidden Ones who walk the line between the darkness and the light. It is your task to gather them all, unite the chaotic lands of Purgatory under one banner, and lead the war to reclaim the world for humanity.

The game is in the pre-alpha stage, and was successfully funded on Kickstarter. You can still pledge to help, to receive a Steam key upon release, along with cool bonuses: {LINK REMOVED}http://graywalkers.com/Pledge-Now.html
Follow the game's latest development status, art & more here: https://www.kickstarter.com/projects/dreamlordsdigital/graywalkers-purgatory-turn-based-post-apocalyptic/updates

Entropy  [author] Jan 29, 2019 @ 11:18am
You can now search for Graywalkers (careful of spelling) in the Steam store: https://store.steampowered.com/app/1003370/Graywalkers_Purgatory/ (turn-based strategy RPG set in a supernatural post-apocalyptic world)

Shyne Jun 7, 2017 @ 2:27am
"We will be moving offices next week so the final scheduled date for the big Update will be on June 10." (May 26)
"We're now working through weekends as well just to catch up and our workdays are now between 14-18 hours long. We know our silence may have been taken as a bad sign but we assure you, it is simply because of us focusing on the game and solving the problems we have regarding the game. Thank you and again we apologize for being quiet" (May 13) https://www.kickstarter.com/projects/dreamlordsdigital/graywalkers-purgatory-turn-based-post-apocalyptic/comments

rsan Mar 23, 2017 @ 9:59am
I've actually tried this one last year from ESGS, I love the turn-based rpg genre. I can help you promote it if you're interested. Just add me and we can discuss