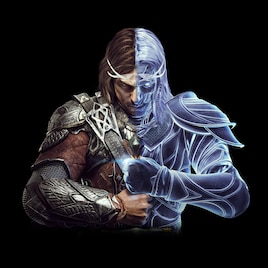 Aristarchus.of.Samos
Offline
See all 1776 collections created by Malchezzar and other people (some may be hidden) This is my second Mod! After finishing my other Mod BonusUniques, I decided to make a Class mod based around a couple of games I enjoyed rather recently, Shadow of Mordor and Shadow of War. These games were a ton of fun for me and make great additions to the Lord of the Rings story.

I had alot of help building this mod from the Modders in the Divinity Discord server, most noteably Feenex, LaughingLeader, and Shrike (thanks guys!) and I hope you enjoy it even half as much as I did making it. Also a special thank you to tangegreen33, who custom made all of the Skill and Status Icons for this mod.

DISCLAIMER
This mod DOES contain some spoilers for the mentioned games in the progression available throughout the mod, so if that is a turn off for you I would (highly) recommend enjoying a playthrough of the other games (either watching cutscenes online or playing it yourself) before playing with this mod. If you continue down this page and into the Skills Spreadsheets, just be warned that you are potentially spoiling yourself on some things.

This mod adds some new features to the game, the first of which is the creation of 2 new classes featuring 44 new skills: the Gravewalker and the Blade of Galadriel Classes.

As of 6/25/2020, this mod benefits from Norbyte's Script Extender, found HERE[github.com].

The Gravewalker Class is a Strength-focused Warfare Class based on the moves and abilities of the main character in Shadow of Mordor and Shadow of War. Wielding a two handed sword, a Gravewalker utilizes their Wraith powers to control the battlefield. Able to mix ranged and melee attacks at will, Gravewalkers can fight solo or command Branded enemy soldiers to fight for them.

Having fused with a Wraith on their deathbed, Gravewalkers are now Banished from Death, granting them the ability to automatically resurrect in in battle after some time has passed, however most enemies who slay a Gravewalker in combat will receive a promotion and level up.

The Blade of Galadriel Class is a Finesse-focused Scoundrel Class based on the abillities of one of the supporting characters, Eltariel, in Shadow of War. She is also a playable character in one of the DLCs for the game. This class is designed (much like the original DLC) as a sub class that utilizes some of the Gravewalker skills in addition to its own skills and the base Rogue skills in Divinity. Due to this dependency on Gravewalker skills, I have added the "Lore Friendly" Gravewalker skills to the Blade of Galadriel Vendor as well so that someone who wants to follow "how the class is meant to be played" will not have to pick and choose from the Gravewalker Vendor. Wielding dual daggers, this class makes use of the Light of Galadriel to deal damage to enemies and support allies in battle.

For the skills that are highlighted in Purple on the Spreadsheet, a weapon matching your character's stats will be summoned to take the place of your currently equipped weapons. I highly recommend keeping your builds non-reliant on your weapons for this reason when using these skills, since you could potentially end up unmemorizing your skills during combat if you lack the base requirements (Memory/skill specialization).

The Vendors can be found in the following locations:

Act II (Reaper's Coast)
Gravewalker Vendor - Celebrimbor, Driftwood, out back behind the Tavern.
Blade of Galadriel Vendor - Eltariel, Driftwood, just inside the main gate on top of a ledge.

Act IV (Arx)
Gravewalker Vendor - Shelob, Arx, near the small Port/Harbor in the main City.
Blade of Galadriel Vendor - Eltariel, Arx, in the gardens on the outskirts of the City.


Additionally, the vendors all sell new custom weapon models which I imported from Sketchfab.

In order to compliment the new movesets I have added, and to better balance them I have included a few new mechanics:

Vitality Boost
In order to make Banished From Death more prominent and Branded's one-off nature per target more influential, along with increasing the base difficulty of the mod slightly, all NPCs receive a 100% Vitality boost when entering combat. This can be toggled off in the Vendor Dialogues.

Due to character limit, the other key statuses are shown in the Skills spreadsheet.

As an added feature, this mod has a "Nemesis Mode" that will grant it's skills to select NPCs throughout the game. This can be disabled/re-enabled at any of the Vendors I added through their dialogue options.

I have added new Nazgul Boss NPCs, voiced with lines from the games, throughout Rivelon that will confront you during your journey. There is 1 encounter in Act 1, 2 in Act 2, 1 in Act 3, and 1 in Act 4. The final Nazgul encounter will not be available unless you have won the other four fights earlier in the game.

As of 12/1: The Act 1 and 2 fights also appear scaled up in Act 4 if they have not yet been cleared. The EXP gained remains the same however so there is no real benefit to waiting till Act 4.

The Act 3 and 4 fights have special Unique rewards, so I would recommend not skipping them.

Additionally for all the Murder-Hoboes out there who like to kill off Skillbook vendors, My vendors (Eltariel and Shelob) are set at level 25 as optional challenge bosses with their own Unique rewards. Feel free to test your luck! (Obviously this isn't lore friendly to the Lord of the Rings games but do what you want in your save files :D)

I have included a number of Unique items and skills in this mod, most of which will level up alongside the player like in my other mod. The skills can be found listed in the 3rd tab of the skills spreadsheet, listed under the Loot Tier and the items can be found HERE[docs.google.com]

Some mods that I'd personally recommend to compliment this mod are:

My other mod, BonusUniques [DE]
It has Celebrimbor's Ring in it, among many other useful uniques for the rest of your party.

Level Up All Equipment - Including Uniques [Definitive Edition]
To level up the rest of your equipment, especially if you find one of my custom Modeled Weapons you really like.

Malchezzar  [author] May 7 @ 9:27pm
@kyekim110 its possible, the animation type and actual item classification are two separate fields, what I did for the gravewalker swords was make them 2 handed with 1 handed animations since it matched the original game better thematically. It would be a little challenging to make all of a weapon type that way, but you could easily do a select few or something similar to what I did in this. If you are interested in trying to figure out how to do it you should join the larian discord server, they have alot of helpful resources and people for those who want to learn how to mod.

Malchezzar  [author] Apr 6 @ 8:30pm
@GhostDragon Technically they are only helmets, I used existing armor for the rest of the outfit for the NPCs, so it only works on human males race wise. The helmets I made from scratch with very rudimentary blender skills and did not have the knowledge or proficiency to do an entire armor set, especially with all the different race options. I made the helmets work for all races but that took a lot of effort, and I was not planning to make standalone versions.

GhostDragon Apr 6 @ 2:46pm
would it be possible to get a standalone or addon of the Nazgul armour?

Malchezzar  [author] Apr 2 @ 7:27pm
@The guy who asked There are multiple tabs at the bottom of the page, which show the Blade of Galadriel Skills and the Nazgul Skills.

The guy who asked Apr 2 @ 5:21pm
is the skills with the nazgul not meant to be shown?

Malchezzar  [author] Apr 2 @ 3:18pm
@The guy who asked the skills have been updated forever? I don't recall ever making edits/new skills without changing the google doc.

mjgg9500 Jan 30 @ 12:34pm
ahhhh Malchezzar, my heart bleeds with desire for your new mod, (dimensional reaper), I can still hear its name echoe in my dreams, *sigh*, if only there was a way to give you more time and proper motivation...anyway, I hope everything is going great in your life and thank you for this work you left behind, god knows how much effort and dedication you putted into this so again, thanks. I will now slip into the shadows and continue waiting for your return...
Sincerely, your anonymous fan...

Naomi_chi Jan 29 @ 12:47am
No the mod's pretty good for what it offers compared to other mods on the workshop. This one had some TLC going into it which obviously conflicts with certain things ingame or that other mods provide. I've used this mod along with 40 others that massively modify gameplay, this mod functioned perfectly with 0 issues on its side.
Immersion breaking? Don't download a LotR mod if you don't want LotR in your game, dunno what else to say there.
Using this mod adds bossfights that are super hard yeah, but they're all optional. If you've done a good job throughout the game and you're stronk, fight 'em. If not and your party composition is too whacky, unfortunately you'll be soft locked here. Be innovative tho, deathfog barrels pog, have some fun, or lock them in an area so they can't get to you. I love using the environment to my advantage, or making an environment if I really have to which I always can.
< >