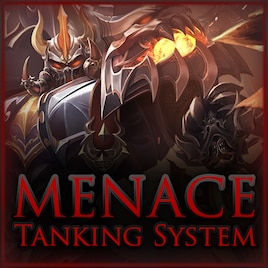 Kalavinka
Offline
See all 501 collections (some may be hidden)

This item has been added to your Subscriptions. Some games will require you to relaunch them before the item will be downloaded.
Description
The new tanking system that lets you grab the enemy's attention with style!
This mod allows characters to generate Menace. The character in a party with the highest Menace is the character who, 9 times out of 10, will be the priority target for AI-controlled enemies.

Menace scales with Wits (or Wisdom for you Divine War players out there). Each point in Wits adds +1 to your Menace gains and -1 to your Menace decreases (except the -10 Menace deficit each turn).

You can generate Menace in a number of ways:

Notably, Menace depletes by 10 every turn, punishing indolence (or rewarding it, situation depending).

You cannot see your total Menace, only how much Menace was generated or lost by a particular action.

Want to add your own Menace-generating skills and statuses?
Simply add the following DB entries to the INIT section of a story code file in any mod:

If you're a mod author and want your statuses/skills in the mod, feel free to send me their filenames and some values you think would be appropriate.

If you want to play with Constitution scaling instead, click here.

brizdeer2000 Feb 8 @ 6:15pm
i was able to fix the issue and able to use the mod but i found that summons don't seem to gain any menace value not sure if this is intentional or not but thought ide let you know

brizdeer2000 Feb 6 @ 6:56pm
hey so ive been trying to download this mod and it shows up in my content folder but it wont show up in my mods list for the game is there a reason for this?

bladex07 Apr 18, 2021 @ 8:54pm
Yeah, I agree with many. Really awesome design/idea. We are enjoying the pseudo tanking but still figuring out which/why X amount of menace is generated. But I have mixed feelings about the AI responding to wayyy across the map. It's probably easier just to make it flat but if there was an intelligence threshold. Less intelligence- target nearest (often attack menace target if they don't resist) and more intelligence had higher resistance to menace and then attack lowest/hp or MVP.

a cat Mar 6, 2021 @ 4:55pm
I feel like I can confirm that something isn't working right here. Multiple times now it's seemed like my partner has pulled higher menace than me despite my best efforts, with no explanation why. The latest instance is the worst offender so far.

Combat starts. I'm in the middle of a group of 6-7 enemies. I proceed to unload multiple damage and condition-applying AoEs, scoring between 15-20 menace per target per ability, easily pulling 350+ raw menace in a single turn. Partner turn comes, they fire a couple of AoEs into an untouched group of 3 enemies to the side, probably 20 menace per target per hit. Despite this, they gain highest menace.

Something about the math just isn't adding up. There's absolutely no way that the amount of raw menace they generated was anywhere close to mine (probably less than half), but the mod thinks otherwise.

Jaidantatem Oct 15, 2020 @ 3:13am
So i'm playing with some Origin characters and I've tried to set Beast as my tank because Battering Ram, Shield Up, Shield Throw, etc. are all really good menace farms and I even set his wits up to 26-30 or so but my Lohse--whose wits are at 10--keeps managing to steal menace just with simple acts of casting Restoration and Teleportation. I don't know if this is intended or if something's amiss. Would love some advice for this.

Orionox Sep 17, 2020 @ 6:12am
Would it be possible to make this scale with leadership and countered by the enemies Loremaster skill? It would be interesting if leadership acted as a modifier (NOT A FLAT +/-) on the damage generated menace. It would be REALLY interesting if ontop of that, enemies with a high enough loremaster skill could ignore the effects of menace.... Also, would be interesting if another ability (sneaking/thievery/perseverance) acted as a stat to decrease your menance gains. Would definitelty be a more involved/complicated system than what is currently there, but I think i like how it would effect the game.

Nickamus Jul 31, 2020 @ 1:18pm
I see a lot of conversation about balancing Menace gains vs decay, what stat to use, caps, etc. Perhaps an ability that you can toggle for free to enable/disable menace generation, or apply a modifier to it, could solve the problem? Perhaps things could generate a static amount of Menace, and you could have a buff that either amplified it, or decreased it? That way the player has more control over who has aggro, and its not an arbitrary stat decision that doesn't necessarily follow logic or build choice. Wits is used a lot for archers - probably not your tank. Constitution has dubious value without other mods, so feels like a point sink. Seems untethering from attributes could bear fruit, if it makes sense code wise.
< >