Store Page
Crusader Kings II >  Workshop > MightNight's Workshop
This item has been removed from the community because it violates Steam Community & Content Guidelines. It is only visible to you. If you believe your item has been removed by mistake, please contact Steam Support.
This item is incompatible with Crusader Kings II. Please see the instructions page for reasons why this item might not work within Crusader Kings II.
Current visibility: Hidden
This item will only be visible to you, admins, and anyone marked as a creator.
Current visibility: Friends-only
This item will only be visible in searches to you, your friends, and admins. 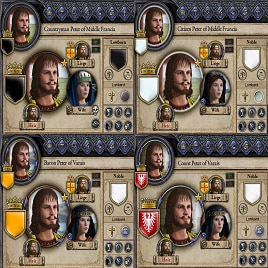 Crusader Kings II: The Reaper's Due

Nendur
Offline
See all 411 collections created by MightNight and other people (some may be hidden)
You need DLC to use this item.

This item has been added to your Subscriptions. Some games will require you to relaunch them before the item will be downloaded.
In 1 collection by MightNight
T-Rexy Chosen

I am happy to announce that Rise To Power will be ported to Crusader Kings III ! This time around there will be two versions of the mod: 1) Rise To Power (Same as this one with a full overhaul) and 2) Rise To Power Light (This one will keep in mind compatibility for people that like to mix other mods with it). I do not have an ETA for it since I need to wait for the modding tools to come out and I honestly would like to try the game myself before I start f**king with it.
This, however, means that I will no longer update the CKII version of the mod :(. If anybody would like to take over this project, please send me a PM on Discord and we can surely work something out.
I'd like to thank each and everyone of you for being such amazing fans (yes even the people that constantly kept bashing it <3) and I look forward to have you guys back in the next chapter of Rise To Power!

Experience the journey of going from a landless nobody, to an Emperor. Decide which government to adopt and which God/s to worship. Purchase land or wait until rulers take notice of you. Fight for your liege or join a mercenary band. Join a crusade in search of forgiveness or join an invasion for wealth and glory.

[ck2.paradoxwikis.com]
!!! READ THIS BEFORE ASKING QUESTIONS !!!

Any mod in the "T-Rexy Chosen" collection.

!!! DO NOT REPORT BUGS WHEN USING OTHER MODS NOT FOUND IN THE ABOVE COMPILATION: YOU HAVE BEEN WARNED !!!

Q: Can I incorporate this mod into my mod or make a submod?
A: Absolutely! As long as it is my work that you are using and you just shoot a link anywhere in the description to the original mod's page...even if you accept donations for your mod!
Others' assets? I don't know since I make my absolute best in order to promote their products and make them gain extra revenue without the potential of losing any of it.

Q: What languages do you speak?
A: English and Italiano.

Q: When are you going to update your Stellaris mods?
A: *Runs away*

Some sounds were taken from the Mount and Blade video game or from websites created and owned by Taleworlds, the copyright of which is held by Taleworlds Studios. All trademarks and registered trademarks present in the assets are proprietary to Taleworlds Studios, the inclusion of which implies no affiliation with the Rise to Power mod. The use of such images/ingame material is permitted as long as they are not sold and also not stated to be your own work.

If you like Crusader Kings 2 you should really check out the Mount and Blade series and the amazing Battle Brothers game! They are both EXCELLENT games and some of their assets where used in order to make Rise to Power possible! I DID NOT create said assets and they are property of either Taleworlds or Overhype Studios. No profit is being made by me using their assets and should the asset creators want me to take down any work created by them I will do so without hesitation. If you love Rise to Power and want to support its development, I will ask you instead to support the following companies/content creators.

This is a project which will most likely take a long time to fully flesh out. I am ONE person and I cannot test every little thing by myself; therefore, bugs are to be expected. Please report any bugs you find :)

Actual video of me collecting bug reports from the community

Gbrille 18 hours ago
5. The mod is easily breakable by itself, a few mods or during gameplay by simply unlucky RNG.

6. No matter what you do, when you search for a wife they will be always in their early 20s and you cannot marry nobles as soon as you acquire nobility it is still somehow locked unless you find a way around until count.

7. As expected, you will need to either own all of ck2 content through purchase to use this mod or subscribe while this still work. Either way it will cost your real life money but not the mod itself.

Conclusion: Try it but if you like to use any other mods it might easily break and no more updates are likely to come out much like sadly much of ck2 mods. Perhaps use this for your initial campaign before switching it off once count to activate every other mods that aren't just musics which always work?

Gbrille 18 hours ago
I love this mod and did several campaigns with it over the past few years but here is a few problems that i found so far going against it since and now:

1. The broken traits, if you like to use any other trait mod over the one included you are going to wonder why it is not showing up and why is so many of them broken. This is the biggest and longest unfixed issue.

2. Ambitions are locked FOREVER, no longer will you be given the choice to pick them, the mod does it randomly for you wherever you want or not.

3. Tall price to purchase holding, it will take you a entire generation or more to acquire enough wealth for such a thing as it cannot be simply cheesed with something such as fighting in the arena a lot to acquire enough prestige.

4. Mod seem to have been abandoned 2 years ago in favor for a ck3 version not yet released. If you prefer ck2 like me any more updates are very unlikely and even less so a DIRELY NEEDED lite version which seem only planned for ck3.

alfred Aug 9 @ 4:28am
I have the same problem as Misesian! I'm just stuck in one province and can't move anywhere.

antoninosalvatore.p Aug 7 @ 12:05am
i only have your mod activated

antoninosalvatore.p Aug 6 @ 11:55pm
I have mercenary with 500 troops and i am not getting any offer am i doing something wrong?

Milos Jul 16 @ 5:57pm
what version do i need to use to play this mod optimally

Paul Jul 2 @ 5:32pm
Is there an alternate manual download for those whose ck2 subscribtion doesnt work on steam steam

Misesian Jul 2 @ 7:35am
Why can't I move anywhere? Every time I right click a county, the only option I see is "Usurp Title"