Store Page
Arma 3>  Workshop > Warhead's Workshop
This item has been removed from the community because it violates Steam Community & Content Guidelines. It is only visible to you. If you believe your item has been removed by mistake, please contact Steam Support.
This item is incompatible with Arma 3. Please see the instructions page for reasons why this item might not work within Arma 3.
Current visibility: Hidden
This item will only be visible to you, admins, and anyone marked as a creator.
Current visibility: Friends-only
This item will only be visible in searches to you, your friends, and admins. 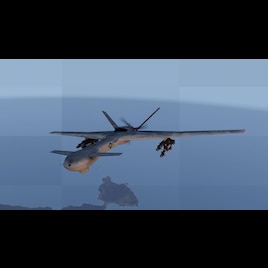 Warhead
Offline
See all 163 collections (some may be hidden)

This item has been added to your Subscriptions. Some games will require you to relaunch them before the item will be downloaded.
Description
This is a modification to Arma 3's pre-existing MQ-4A Greyhawk drones which adds a drone capable of functioning as an AC130 gunship. All credit for the models, weapons, and pretty much everything else belongs to BIS. All I did was tweak the drone so that it could behave as an AC-130 style gunship. HUGE thanks to A26mike for his work on streamlining/reformatting the mod.

If you do not yet use the A3TI mod, I highly recommend installing it. It makes the thermal imaging much better.


How to use:
1. Drag drone into scenario from editor or from Zeus, or use the following command in the debug console:
ac130 = createVehicle ["B_Warhead_AC130_F", position player, [], 0, "FLY"]; createVehicleCrew ac130;]
2. Command drone flight path from UAV terminal as you would with a vanilla drone; set loiter range, altitude, set behavior to NEVER FIRE to prevent the drone AI from engaging targets autonomously
3. Take control of gunner using action menu or UAV terminal menu
4. Tap "T" to range/acquire your target. If you do not do this your rounds will miss. Once a solid green box appears around the target, the targeting computer is compensating for movement, and the rounds should land near the center of the reticle.
- If there is a white solid box, the target is ranged, and you can fire, but it will be much less accurate
- Different rounds have different ranges (eg 40mm APFSDS has a longer "green box" range than 40mm GPR-T
rounds)
5. You can lock onto laser targets. If you lock onto the drone's laser, you can fire at pretty much anything (recommended for destroying buildings/material not picked up by the drone's targeting computer)


Change Notes
--> New 20mm gatling created to fix sound problems when using JSRS mod (Hate it? Let me know! I may still invest time in trying other ways to fix the JSRS problem, but this works well for me)
--> Weapons renamed to reflect their real-world counterparts (let me know if these are accurate, I did some wikipedia research but I'm no pro)
--> Target locking should be more persistent now (older versions lost lock easily)
--> 105mm reload time increased


Known Issues (will be fixed ASAP):
--> Its OP. Yeah I know.
-------
Please feel free to modify this. If you know how to make this more stable, or more intuitive, feel free to change things or reach out with advice!
Popular Discussions View All (1)

Sir. Vapenation Jul 7 @ 2:44pm
@Nocturnalfool
Follow what warhead said.
Also, you do have this mod loaded, and you did spawn the 130, not the regular drone, right? its found under NATO Drones.

Warhead  [author] Jul 7 @ 1:02pm
@Nocturnalfool - If you are still having this problem, post your complete mods list in the Bug Reports/Incompatibility and I'll try to figure it out.

Nocturnalfool Jul 6 @ 1:30pm
i loaded up the mod and i dont have anything but the scalpel

Also to those complaining its "OP"
Do me a favor and look at the real C130, this is nothing compared to the real deal.

Aim_Terror_[Zwarte] Jun 4 @ 5:04pm
@warhead I would fix the problem. thanks anyway

Warhead  [author] Jun 4 @ 4:48pm
@Aim_Terror can you describe the problem in more detail?

Warhead  [author] Jun 3 @ 3:58pm
@Sh0kGaming hahahaha IDK what's going on with that then. On my end it made a difference, but I have been wrong before haha
< >