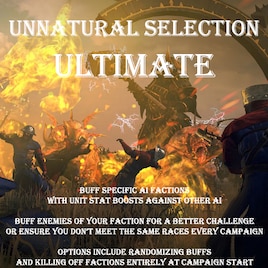 This item has been added to your Subscriptions. Some games will require you to relaunch them before the item will be downloaded.
In 1 collection by Jadawin
Jadawin's Game Overhaul

30 items
Description
With this mod you can apply a buff to almost every AI-controlled faction in the game that will increase their chances to do well against other AI. Battles against the human player are unaffected.

1. There are now no debuffs anymore, which were quite ineffective anyway, only buffs. The way to debuff factions is to buff other factions and leaving those you don't want to succeed without a buff.
2. The buff levels have been redesigned. The applied effect is simplified (just Ward Save + Weapon/Missile Damage buff) and there are now six buff levels available instead of the previous three.
3. Major new feature: If a faction has a buff equal to or greater than a configurable threshold value, it will not only have better chances in battle against other AI. It will also assume a different personality. For example with default settings, every faction with a buff of 4-6 will act as if it was a major faction of its race. This is irrelevant for factions like Grimgor or Empire who have obviously always been major, but greatly changes the behavior and performance of minor factions who will now no longer be minor. Previously such a minor faction might win more battles when buffed, but because it just didn't try to build big armies and take many settlements, it would still always remain weak.
4. For the above feature to fully work, you need to also use this small mod that removes the autoresolve bonuses for a number of major factions that still had them:
https://steamcommunity.com/sharedfiles/filedetails/?id=2550579040
Otherwise some factions like Naggarond, Morathi and Grimgor still have a major advantage over other AI factions.
By using this and the other mod together, you remove most of the 'guardrails' CA have built in to ensure the success of the important major factions, and their mechanisms are replaced by the buffs from this mod, giving you a lot of control over the faction balance in your campaigns.
Note that the traditional major factions still keep their normal personalities, meaning they will still play as major factions even if they don't get a buff from this mod. They just have more competition from previously minor factions, who can now win against them (if they have buff equal or higher to the personality switch threshold). If you don't want any minor factions to be able to dominate the map, set the threshold to a high value and give them only buffs below that value.
5. The mechanism to remove the buffs when the AI is fighting against the human player has been improved. As a result, there should no longer be erroneous autoresolve predictions.

Make sure you have the MCT: Reborn mod subscribed and enabled, then open its settings from the Main Menu before starting a campaign, or during your first turn. Only at that time the randomizer options and the faction-removal feature are usable. But you can still adjust faction buffs at any time during campaigns. The configuration screen always shows all factions, so it will appear as if you can apply a buff or debuff to your own faction. This will however not have any actual effect. Also, it will list all factions even if they are not on the map in your current campaign (for example Couronne if you are playing Vortex). Buffing or debuffing a faction that is not on the map will simply have no effect.

If you set options in the randomizer section, those will be applied after you end your first turn. This happens only once and only after the first turn of the campaign. The randomizer shuffles the active buffs for the eligible factions. You can see the results and change them at any time by opening the MCT settings again and looking at the sliders for the individual factions.

If you set a faction buff to -1 before the second turn (or have it randomly assigned to a faction), then that faction will be KILLED after the first turn. Do not apply this to factions that are scripted to interact with your faction in the early game (eg Yvresse if you are Grom), or your game may crash.

The buffs for factions apply an effect to all their forces, including garrisons, that improve their odds when fighting against other AI factions. The effect is removed when the AI army is close to a human-controlled army, so your battles against the AI are unaffected.

Because randomization and the delete-faction feature are only applied once after the first turn, they do not affect factions that don't exist on the map on the first turn. This includes all Chaos factions, Nakai's vassal and several horde factions like minor Beastmen tribes. They are only added to the game later. So it's not possible to delete them, and if you want to buff them, you have to do that manually.

The buffs are quite effective, but there is still room for variation, so a faction may occasionally thrive even when weakened, or get killed early despite having been buffed. Some factions are hopeless causes and are almost always destroyed even with a strong buff, because their starting position dooms them.

Factions that often act together or confederate early should probably be buffed together. If one of them is buffed but then gets confederated by a faction without a buff, that faction will obviously have worse odds to succeed.

Giving several factions buffs that are neighbors and likely to fight each other is kinda pointless as the buffs will neutralize each other.

TWW is zero-sum, everything one faction gains, another one loses. For example, if the Vampire Counts are doing better, this almost always means that the Empire will be weak. If Clan Skryre and Norsca are buffed, they'll probably crush Bretonnia.
Popular Discussions View All (3)

Wyzilla Jan 2 @ 6:55am
what would be the best settings to use to make the map enter a more stable condition and blobbing to happen? I want to try to tool the map so that every race remains on it without there being total extinctions.

Jadawin  [author] Dec 30, 2021 @ 7:32am
Loaded a ME campaign, set all factions to -1. Everyone was killed after first turn. Did the same for Vortex, also worked flawlessly. In different campaign I attacked AI that had buffs and started manual battle, also no problems.

So no clue where your problems come from. Unless (for the first one) you forgot to disable randomization options. If you set a faction to -1 but have randomization for that race enabled, then obviouly the -1 you set manually is meaningless because the randomizer will change the value to something else.

Lightning Jesus Dec 30, 2021 @ 6:03am
Weird. I even resubbed to both this mod and all my other mods, consequently redownloading them all. Your mod won't even take one faction off the map. I'm not sure what's going on because I have an even shorter mod list than I did when it was working, and now all of a sudden it's not.

Is it a load order issue, ya think?

Jadawin  [author] Dec 30, 2021 @ 1:51am
@Lightning Jesus: The mod isn't meant to wipe half the map clean. That said, I tested once setting every faction on the map to -1 and it worked, everyone except some Rogue Armies was killed.

Hard to say what's causing these problems for some, for most users it seems to work fine.

First step as usual is to unsub from the mod and then resub to make sure you have the newest file, Steam often fails to update mods properly.

Yes, MCT does save settings into the save file although if the mod is disabled this will not have any effect.

pg100 Dec 30, 2021 @ 1:31am
@Jadawin well, the game crashes when I enter my first manual battle. When that occurs I usually disable the mod, and continue my campaign without the mod. Should you disable the mod before entering manual battle, and then re-enable it again afterwards, or am I missing something?
Another question: once the settings have been loaded at the start of a new campaign, will these settings be stored somewhere in the campaign file-settings even if the mod is disabled after a few turns?
Ps. What I meant to write in my previous post was: “…. Is it because the mod is not designed to work, when the player wants to resolve a battle manually, or has it something to do with load-order, or perhaps the fact that I use SFO?...”