Store Page
Arma 3>  Workshop > Notorious's Workshop
This item has been removed from the community because it violates Steam Community & Content Guidelines. It is only visible to you. If you believe your item has been removed by mistake, please contact Steam Support.
This item is incompatible with Arma 3. Please see the instructions page for reasons why this item might not work within Arma 3.
Current visibility: Hidden
This item will only be visible to you, admins, and anyone marked as a creator.
Current visibility: Friends-only
This item will only be visible in searches to you, your friends, and admins. 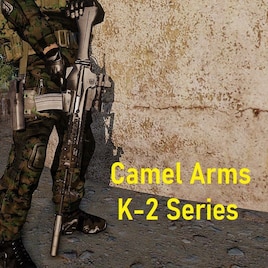 Camel
Offline
See all 48 collections (some may be hidden)

This item has been added to your Subscriptions. Some games will require you to relaunch them before the item will be downloaded.
Description
Daewoo K-2 and Variations
Daewoo Precision Industries K2 assault rifle was developed by the South Korean Agency for Defense Development and manufactured by S&T Motiv (formerly Daewoo Precision Industries). It is currently the standard service rifle of the Republic of Korea Armed Forces. Shoulder-fired and gas-operated, the K2 is capable of firing both 5.56×45mm NATO and .223 Remington ammunition. The K2 supplanted the M16A1 assault rifle for the Republic of Korea Armed Forces since its adoption in 1984.
(from Wikipedia)

Before you read
This is DEMO version, do not expect further QA or updates.

Copyrights and Attributes
- Licenses : APL-SA (https://www.bohemia.net/community/licenses/arma-public-license-share-alike)
- Reuploading of this content on Steam Workshop is strictly prohibited.
- Big thanks to Kally, who gave us primary assets. [https://steamcommunity.com/id/xenobuttmonster]
< >
16 Comments

This demo is not be updated, sorry.