Store Page
Stellaris >  Workshop > walshicus's Workshop
This item has been removed from the community because it violates Steam Community & Content Guidelines. It is only visible to you. If you believe your item has been removed by mistake, please contact Steam Support.
This item is incompatible with Stellaris. Please see the instructions page for reasons why this item might not work within Stellaris.
Current visibility: Hidden
This item will only be visible to you, admins, and anyone marked as a creator.
Current visibility: Friends-only
This item will only be visible in searches to you, your friends, and admins. 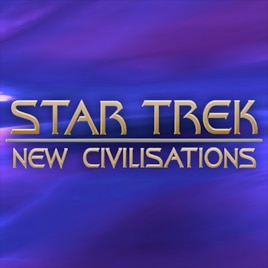 barraganap
Offline
See all 183 collections (some may be hidden)

Description
New Civilisations is a Star Trek mod for Stellaris, presenting players with a large number of empires to choose to lead to dominance in a number of Star Trek settings. Formerly known as "Strange New Worlds", the project name was changed to avoid confusion with the new TV series in development.

Note
A Steam Workshop bug incorrectly states the size of this mod. It is in fact 4gb+.

Languages:
Translation ongoing - see discussions for information on how to contribute

Major Features
Ships:
Over 650 unique ship sizes and 1,600 ship sections across nearly 80 graphical cultures. Classic designs from Starfleet, the Klingons, Dominion and others sit alongside full shipsets for races such as the Zahl, Ba'ul, Husnock, Karemma, Nyberrite Alliance, Interstellar Concordium, Kreetassan, Nygean, Na'kuhl Protectorate, Vaadwaur Supremacy and many others.

Species:
Over 160 unique species with unique clothing options. From all the classic races such as the Romulans, Klingons, Cardassians and Borg, through to even the more obscure members of the Star Trek Galaxy, such as the Troyans, Paradans, Kzinti, Grazerites, Amaralans, Kessok and more.

Events:
Many hundreds of events, anomalies, dig sites and crisis chains. Including:

Mechanics and Features:
Institutions and Agencies allowing for players to set policies and interact with parts of their empire. Including:

Exploration Clusters allow for exploration to continue into the late-game and beyond.

Improvements to the terraforming system, allowing players multiple methods of increasing or reducing heat, atmosphere etc. in order to make a planet more suitable for their needs.

Many new Megastructures added, including Subspace Relays, Fleet Yards and Trading Stations which allow for the purchase of ships, trade goods, relics and rumours and intelligence.

Technology, Economy and Empire Setup:
Revamped and optimised technology tree. Improvements in behind-the-scenes categorisation and structure enable a number of mechanics and systems that would otherwise be impossible.

Improved empire and government setup, allowing players to better customise their empires during gameplay, and removing many hyper-specific restrictions on civics, traits etc.

Looking to support Star Trek: New Civilisations?
New Civilisations is a passion project, and no payment is or ever will be required. That said, if you would like to donate a cup of coffee's worth[www.paypal.com], your support would be very much appreciated.
Popular Discussions View All (158)

walshicus  [author] Jul 3 @ 3:38am
Not really. They're where they are mostly to allow easy access to at least one cluster by the majority of empires.

kriechgang Jul 3 @ 3:22am
I still do not like the grey "holes" insite the empires on the map. But I have no clue how to avoid them, when we are not able to build starbases in the clusters.
Could you relocate them (at least for the static maps) between the galaxy arms?

walshicus  [author] Jul 3 @ 2:18am
Nebulas can't be interacted with in that way.

Long term my plan is to have other areas like the Badlands, Briar Patch and such represented as Exploration Clusters too, with their own set of exploration missions.

kriechgang Jul 2 @ 10:53pm
Turning the rather pointless nebulas into the exploration clusters is a great idea. Turning the clusters into an area on the map and then having multiple systems in an Cluster sounds great.

KayinDreemurr Jul 2 @ 1:49pm
Also, would it be possible to decouple alliances from the diplomacy tradition? Playing as the Klingons and I've got really good relations with the Romulans, but can't form a coalition/alliance with them because neither of us have the tradition. But well, as Klingons (and or Romulans) getting such doesn't seem like the sort of tradition one would aim for.

could always have the part of the diplomacy tradition that would unlock it say give a boost to envoys, more diplomatic weight, or perhaps faster alliance cohesion gain? Oh that actually sounds like a good one.

KayinDreemurr Jul 2 @ 1:47pm
Thus why I was suggesting have it be a geographical area on a map. Make it behave more like Nebula's, which would allow it to potentially stretch over borders.

Even treating it like this still blocks access to them from other civilizations, as all that's required is to build outposts around it, and given many civilizations tend to block access for portions of the game (even after going xenophillic...)

walshicus  [author] Jul 2 @ 12:06pm
TBH this is the way I wanted it to work from the start, we only recently got the tools to make it happen.

Clusters are not *one* system, they're thousands of them accessed through one location for gameplay reasons. Maaaaaybe down the line I'll add some mechanism where with enough "influence" within a cluster you can build a starbase at the gateway. But I don't want one country to be able to easily block off access to them.

KayinDreemurr Jul 2 @ 9:31am
Am kind of wondering now if I start up my current Klingon run if I'll lose my starbase in that cluster.

KayinDreemurr Jul 2 @ 9:30am
No yeah I agree with that being a problem. Honestly I kind of feel like if you're going to do that, you should just change the exploration clusters to being like a geographic area on the map and make the missions to explore them be situations where the events can occur during them.

kriechgang Jul 2 @ 12:42am
Hi walshicus, this is by far the best star trek related stellaris mod.
But I am not a big fan of your recent change to the exploration clusters.
Not being able to build starbases in them is quite annoying, because now there are "holes" inside your empires borders. It just looks wrong.
< >