Store Page
ARK: Survival Evolved>  Workshop > Ferodra's Workshop
This item has been removed from the community because it violates Steam Community & Content Guidelines. It is only visible to you. If you believe your item has been removed by mistake, please contact Steam Support.
This item is incompatible with ARK: Survival Evolved. Please see the instructions page for reasons why this item might not work within ARK: Survival Evolved.
Current visibility: Hidden
This item will only be visible to you, admins, and anyone marked as a creator.
Current visibility: Friends-only
This item will only be visible in searches to you, your friends, and admins. 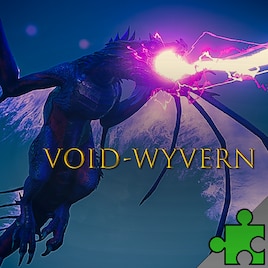 Ferodra
Offline
See all 385 collections (some may be hidden)

This item has been added to your Subscriptions. Some games will require you to relaunch them before the item will be downloaded.
Description
Adds a new Wyvern Variant to the ARK!

This is the Void-Wyvern!
It basically is a reskin of the Fire-Wyvern, combined with the powerful Lighting Blast of the Lighting-Wyvern, which now is Void-Tinted and has an altered breath sound.
They also come in various color schemes - with a rare one to top it off (Completely Red).
It normally lives on Scorched Earth, which has to be installed to make this mod work properly.
Once installed, the Void-Wyvern is automatically added to the Wyvern Spawner (More info on compatibility below). A wild dino wipe with "Cheat DestroyWildDinos" may be necessary.

They spawn, wherever other Wyverns spawn (on compatible maps). They also CANNOT be tamed directly, but have to be hatched through a stolen egg. The Egg spawn mechanic is exactly the same as for other Wyverns. You have to be lucky, as there are not that many wild Void-Wyverns at a time!

It is added to any other map through the SE_DinoSpawnEntriesWyvern Spawn-Entry-Container by the map author. So basically the default way of spawning in most Wyverns to a map.

(Known) Compatible Maps
Note: This list is based on what i\'ve already tried. Other maps could also be compatible!
Valguero is not included, as it does not use an accessible Spawn-Container for the Wyverns. So i don\'t see a good way to implement it, sorry!

Spawn codes do not work
ChaosSwarm

Nutbucket Feb 18 @ 5:37pm
Is there a way to add this varient to ancient dragons and wyverns? so I can edit it and work on it easier plus have dive bonus?

OllieBear Jan 29 @ 5:41pm
is it compatible with the centre

Destroyer1250 Jan 29 @ 3:18am
there are 180 of those on my ragnarok map wtf? that s more than all of the other wyvern variants combined. They overspawn recklessly

pentiumgeorge Dec 17, 2020 @ 5:40pm
Is there a command to eliminate resp wyvern how to what and where to put it in the files so that they do not resp