Greenlight > Games > Grip Digital's Workshop
Greenlight is being retired. For more information on how to submit games to steam, refer to this blog post.
This item has been removed from the community because it violates Steam Community & Content Guidelines. It is only visible to you. If you believe your item has been removed by mistake, please contact Steam Support.
This item is incompatible with Greenlight. Please see the instructions page for reasons why this item might not work within Greenlight.
Current visibility: Hidden
This item will only be visible to you, admins, and anyone marked as a creator.
Current visibility: Friends-only
This item will only be visible in searches to you, your friends, and admins.
Atomic Ninjas
Description Discussions1 Announcements1 Comments280 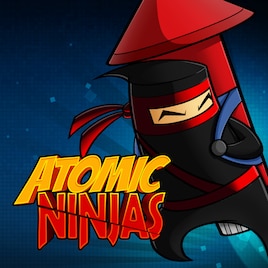 Thanks to everyone who upvoted Atomic Ninjas and helped us get it to Steam!

This is as much news for us as it is for you, so give us a little time to craft our release plans and we will announce more details soon.

Read More
Description
Release date: Q1 / 2015
Atomic Ninjas
is a colorful and funny multiplayer action game, in which you control super-powered ninjas in frantic online matches against other players. It was released in October for the PlayStation 3 and PlayStation Vita.
What makes it different is that, you are unable to directly kill other players. Instead, you must outsmart and outflank your opponents and kill them using various environmental hazards and obstacles, such as lava pits, laser beams, traps, moving platforms, falling crates, etc. This gives a completely new twist to the traditional 2.5D genre!

“Our demo was filled with slapstick charm that made the experience silly and fun“,
Polygon
„The game looks nice. The character models are cute and colorful, and the arenas are varied“,
Destructoid
„Atomic Ninjas is a humorous and intense brawler“,
Push Square
„The cute little characters and laughs that the game brings are all something worth treasuring. It’s rare to find a game that is so enjoyable. Get it“,
SpawnFirst
Each one of the game’s seven arenas is like a playfield with infinite number of possibilities to eliminate the competition. There are pick-ups, crates, lifts, air vents, levers, ninja-launchers, hiding spots and traps to experiment with. The most malicious players will be the most successful ones. Single-player offline matches against bots are also supported.
You will be able to unlock new ninjas and super-abilities as you play that will make you invisible, super-fast or extremely lucky ;-) Each super-ability has also its own level-up system. With six weapons that you can use, you will be able to play with exactly the ninja you want to be! From a stealthy assassin to a wrecking ball!