Store Page
DayZ>  Workshop > Ermiq's Workshop
This item has been removed from the community because it violates Steam Community & Content Guidelines. It is only visible to you. If you believe your item has been removed by mistake, please contact Steam Support.
This item is incompatible with DayZ. Please see the instructions page for reasons why this item might not work within DayZ.
Current visibility: Hidden
This item will only be visible to you, admins, and anyone marked as a creator.
Current visibility: Friends-only
This item will only be visible in searches to you, your friends, and admins. 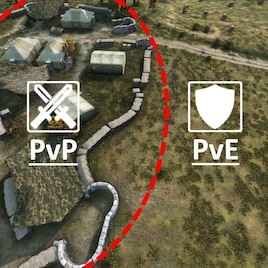 Ermiq
Offline
See all 221 collections (some may be hidden)

This item has been added to your Subscriptions. Some games will require you to relaunch them before the item will be downloaded.
Description
There's the in-game admin UI menu now. I strictly suggest to use it instead of editing config files manually. And you don't need to restart server to apply changes anymore if you change them via the menu.
See the installation instruction. It has been updated.
The mod is designed for PvE/PvPvE servers.

PVEZ provides several customizable features to help server admins to regulate and manage PvE rules on their server:
- restore health lost when attacked by another player in PvE area;
- reflect different types of damage to the attacker;
- setup zones as PvP or PvE areas;
- notifications sent to a player on entering/leaving a zone;
- 4 modes:
- disable damage to clothing and cargo if the damage is caused by other players in PvE area;
- option to allow PVP damage from PVE to PVP zone and vise versa;
- the Lawbreakers system, which helps to deal with those who break PvE rules;
- option to show lawbreakers on the map;
- bounties for killing lawbreakers;
- quite a lot of other customizable options.

What is the Lawbreakers system?
Known issues:
Shotgun in the face kills. Grenades kill. If something can kill with just one hit - it will kill.
Unfortunately, Bohemia doesn't let us to get access to the actual damage registration, we can't modify/disable damage at runtime.
PVEZ just restores the health to a player who has been hit by another player in PvE area, but apparently, it doesn't work in one hit - one death cases.

Donations:
If you like the mod, I'd really appreciate it if you buy me a sandwich and a cup of tea:
PayPal[paypal.me]

About repacking:
Repacking and republishing as a new mod is not allowed (again).
But if you want to include the mod in your server mod pack, then provide a link or hyperlink to this page in your server mod description page.
Popular Discussions View All (33)

Please Check this MOD!!!! Your PBO is inside

PatronSaint Jun 9 @ 7:50pm
Is it possible to load PVEZ into DayZ Editor?

Bobroglaz Jun 8 @ 9:43pm
you have to set it up in you keyboard cfg in game

The Jebus Lizard Jun 5 @ 12:50pm
Can get the guys to record and show it. But that's exactly what's happening on my server. Forcing 1st Person Perspective only works again if they cross into the PVE zone, and then back over to the PVP zone.

Bobroglaz Jun 5 @ 12:26pm
humm I've not had that problem, when the server see's they are on a pvp zone regardless if they log, it should place them back in 1pp.

The Jebus Lizard Jun 5 @ 12:24pm
Gunna second (third?) the issue @Zena10 has raised. Players can log off inside a PVP area, relog, and it breaks the 'force 1st person perspective'.

Also, seems it's not picking up players GUIDs in the online/roster. Could this be the reason?
< >