Store Page
Europa Universalis IV>  Workshop > Julien's Workshop
This item has been removed from the community because it violates Steam Community & Content Guidelines. It is only visible to you. If you believe your item has been removed by mistake, please contact Steam Support.
This item is incompatible with Europa Universalis IV. Please see the instructions page for reasons why this item might not work within Europa Universalis IV.
Current visibility: Hidden
This item will only be visible to you, admins, and anyone marked as a creator.
Current visibility: Friends-only
This item will only be visible in searches to you, your friends, and admins. 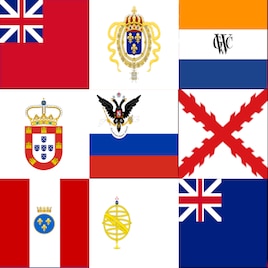 Julien
Offline
See all 37 collections (some may be hidden)

This item has been added to your Subscriptions. Some games will require you to relaunch them before the item will be downloaded.
Description
This mod changes the dynamic colonial nations to less dynamical counterparts with more historical flags.

The mod is restricted to colonies for:

As some of these nations did not have colonies in all in-game colonial regions, some of the new colonial nations have entirely made-up names, while the use of flags have sometimes been extrapolated, but always within a certain historical logic. (For example, the Red Ensign is used for Britain's North Atlantic and Caribbean colonies, while the Blue Ensign is used in the South Atlantic, Pacific and Oceanic colonies.) For names, I have tried to base them on historical data to the best of my ability. (For example, French Eastern America will be called Nova Gallia, after the name Giovanni Verrazzano gave to the area when exploring the Eastern American coast line for King Francis I.)

Please note that dynamic colonial nations will still form for the nations listed above, but they will transform in their modded counterpart after a few in-game days. Also, when starting the game on a later date, the game will be filled with dynamic colonial nations, which will be transformed in their more historical counterpart after a few in-game days (as shown in the screenshots).

- Not ironman compatible.
- As of recently the mod prevents you from colonizing inland provinces where a historical colony has been formed. Unfortunately, I have yet to solve this issue. However, your colony will still colonize inland provinces for you. In order to help you with that, I recommend using this mod: https://steamcommunity.com/sharedfiles/filedetails/?id=1961114540. In my opinion, this also tends to give the colonial expansion a more historical pace (no fully developped Nebraska in 1600). Meanwhile, I will try to solve this issue.

If you have any feedback, please feel welcome to leave a message below.

truelove101992 Jul 13 @ 2:34pm
Could you add colonial flags for colonies the Roman Empire? I could find flags to use if it’d be easier/if you’d like. I’m planning on playing legacy game from Ck2, and could love to have my colonies (playing as the Roman Empire) to have appropriate flags.

Perry May 1 @ 12:20pm
@Julien thanks for that! Actually, i woudnt mind to go translating if you send me the texts at least for the spanish language

Julien  [author] May 1 @ 9:35am
@Perry, issue should be fixed. However, all texts will be in English. I don't have the language proficiency or the time to make decent translations.

Perry Apr 28 @ 12:17pm
@Julien Ok, I already checked it. I put it in english, and now its working properly. Anyway, Is still there any way to "deal" with that in another language? Thanks for the replied

Coldwinter956 Apr 22 @ 3:32pm
@Julien Can I use add some of your mod into my new colonial mod if I properly cite you and give you credit for the code I use?
< >