Store Page
ARK: Survival Evolved >  Workshop > Kiwi's Workshop
This item has been removed from the community because it violates Steam Community & Content Guidelines. It is only visible to you. If you believe your item has been removed by mistake, please contact Steam Support.
This item is incompatible with ARK: Survival Evolved. Please see the instructions page for reasons why this item might not work within ARK: Survival Evolved.
Current visibility: Hidden
This item will only be visible to you, admins, and anyone marked as a creator.
Current visibility: Friends-only
This item will only be visible in searches to you, your friends, and admins. 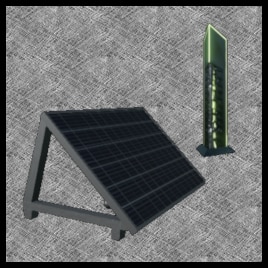 This item has been added to your Subscriptions. Some games will require you to relaunch them before the item will be downloaded.
Description
mod id : 1862089790

Hello everyone, here is an explanation of the new elements and their consumptions

1) Solar panels (PS):
They will allow to use solar energy (day) and charge batteries in the power terminal controller (PTC)
a PS can power up to five items that use electricity.

2) The power terminal controller (PTC):
It is a management device that works like an inverter, It can charge batteries during the day and redistribute energy at night.

He will charge the batteries as follows:
if you have a solar panel and you do not exceed the power capacity of the latter, it will charge a battery in one day to hold the charge of five objects during the night.
To allow the maintenance of more objects, it will smother you more solar panels safe the electric linen.

Warning, overload in consumer the power terminal controller will lose in capacity of recharge of the batteries.

The basic electrical generator at ARK can also power the controller power terminal. All the time, only one generator on the line will be taken into account for charging.
When a generator is connected, it consumption will undergo changes in relation to the consumers it feeds.

The wind turbine works like a solar panel, but with the wind.

The power terminal controller will give you information on:

Generator capacity or panels that feed it when it receives power.
Remaining battery capacity when providing electricity


The making is stopped, if you want continued it, get original files to: https://github.com/kiwi05/Solar-plus
< >
43 Comments

DarkFire Jul 31, 2020 @ 9:22am
This is the best solar mod I've found. Gives the possibility of using solar power without it being too easy and therefore making any other power source obsolete. Excellent work!

Thank you for your comment.
yes the wind turbine work with the TPC

bluebananaeater Jun 6, 2020 @ 12:39pm
Wow. Just wow. This mod is one of the best i have ever tried, and it deserves more that 4 stars, but it needs just one more thing, and that is wind turbines power the PTC. Please tell me if it does or doesn't charge, since i didn't try it myself but heard from others a long time ago.