Store Page
TerraTech>  Workshop > ZeroGravitas's Workshop
This item has been removed from the community because it violates Steam Community & Content Guidelines. It is only visible to you. If you believe your item has been removed by mistake, please contact Steam Support.
This item is incompatible with TerraTech. Please see the instructions page for reasons why this item might not work within TerraTech.
Current visibility: Hidden
This item will only be visible to you, admins, and anyone marked as a creator.
Current visibility: Friends-only
This item will only be visible in searches to you, your friends, and admins. 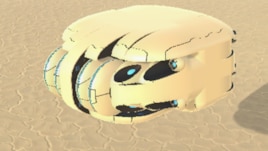 This item has been added to your Subscriptions. Some games will require you to relaunch them before the item will be downloaded.
In 1 collection by ZeroGravitas
ZeroG's Enemy population submissions

69 items
Description
Simple hover enemy build, purely Better Future blocks. Inspired by "Flight of the Navigator" [1986] and the back of Echo's Pod on the Route 66 payload in Overwatch.

"Parashu" is an Indian Battle Axe. It's a name I decided on as this is the bigger brother of this smaller, sleeker BF hover tech build which made me think of a hand axe (a primitive cutting weapon that's basically a sharpened rock that fits nicely in the palm of the hand). Both with the same inspirations.

It's viable as a player tech, but kind of slow and not over-powered. The main damage source are the 4 cyber disc lasers in the front. It was mainly intended as an enemy population submission, but the dev's community core submission threads have been thin on the ground, of late.
< >
2 Comments