Store Page
RimWorld >  Workshop > Paladin's Workshop
This item has been removed from the community because it violates Steam Community & Content Guidelines. It is only visible to you. If you believe your item has been removed by mistake, please contact Steam Support.
This item is incompatible with RimWorld. Please see the instructions page for reasons why this item might not work within RimWorld.
Current visibility: Hidden
This item will only be visible to you, admins, and anyone marked as a creator.
Current visibility: Friends-only
This item will only be visible in searches to you, your friends, and admins. 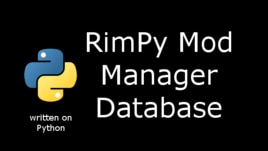 This item has been added to your Subscriptions. Some games will require you to relaunch them before the item will be downloaded.
In 1 collection by Paladin
Project Realism

This is a database for RimPy Mod Manager. You need to download an app to actually use all of it benefits (check Download section below). Database contains latest information about mods and latest versions of community made auto sorting rules. You should not put Database in your active mod list, because it contains o useful data for game itself, only data needed for RimPy Mod Manager.
The benefits of RimPy are as follows:

DO NOT EXPECT RIMPY TO SORT YOUR MODS ACCORDING TO WELL KNOWN GUIDE!!!
It will sort them differently and that is normal behaviour, read below about how sorting will be done.

First: Alphabetically
This allows mod lists to be standardized and will help with bug reports.
Contrary to some belief, alphabetized mod lists are 100% ok.
Every mod must be loaded according to a few things:
-Known dependencies are loaded above their dependent mods (Library mods like Harmony for example)
-Known conflicting mods are loaded above/below each other as specified by author/s
-Known incompatible mods are not loaded together

Third: Manifest Files from Fluffy's Mod Manager
Some mods still support these files, but may be considered obsolete due to the newer vanilla sorting features.

Fourth: Steam Data
When a mod author states a mods' dependencies on Steam, RimPy reads it.
This may be considered outdated or inaccurate in some cases.

Fifth: Custom and Community Rules
Rules made by users like you!
Reviewed and then submitted into this mod.
This is also when your own locally made custom rules are implemented.
That means you can make RimPy sort mods however you want, automatically, once you make your own rules.

If you have problems with RimPy try these steps:
- Restart PC
- Reinstall videocard driver
- Report bugs at this link

I get errors when I enable this mod. Fix it!
This Steam mod contains the database of rules that modders and the community have made. Download the mod and keep it unloaded for the database, or choose not to use it.

Fluffy
For his great mods. This program uses Manifest.xml files implemented by him with Mod Manager. The pioneer in autosorting, before RimWorld and Ludeon even had it.
Dr_Zhivago
For helping with Steam, giving ideas, troubleshooting and creating this great description and tutorial!
Abbanon
For general support and making our amazing discord below!

HacKan Jul 31 @ 9:59am
@paladin cool! gonna send u an issue. there are a couple of failures i'm noticing in windows that should be easy fixes :)

Paladin  [author] Jul 31 @ 9:54am
@HacKan, do you need sources for that? I mean building a DEB, RPM, AUR packages? Apparantly, I am not ready to release sources. But if you want to help, you may contactme via PM and/or create github issue ticket.

HacKan Jul 29 @ 7:12pm
Hey guys, have u thought on releasing the code? making it open source? that way we could help w/ it, as well w/ creating packages for distros and stuff

Paladin  [author] Jul 27 @ 2:59am
No, I didn't. I see no pros, just cons. Instead of publishing on github, I will have to publish that on AUR too. AUR is only for Arch, afaik. What about Debian like systems or RPM? They have repositories too, should I publish in there too? May you give some reasonable pros for doing that and cons of current in-built self updating in RimPy?

Sined Jul 27 @ 12:53am
Have you looked into it at all? Its neither too complicated nor too time consuming. Also it is the proper way to release software for linux (or arch at least).

Paladin  [author] Jul 26 @ 10:31am
I see no purpose for that. RimPy is self-contained and has autoupdater. Supporting other repositories will fail, because too time consuming.

Sined Jul 26 @ 5:33am
I would highly recommend you make an actual package and upload it to the AUR. Instead of giving just the tarball.

Sarai Jul 24 @ 5:09pm
@paladin thank you so very much! You are already a legend so thank you for this!

Kyrox Jul 24 @ 2:44pm
@Paladin Thanks for the update! Rimpy seems to be working properly on my Steam Deck both in Desktop Mode and Deck mode. This is such a huge game changer. Thank you so much for your help and amazing program. ♥
< >