Store Page
Hearts of Iron IV>  Workshop > Natt's Workshop
This item has been removed from the community because it violates Steam Community & Content Guidelines. It is only visible to you. If you believe your item has been removed by mistake, please contact Steam Support.
This item is incompatible with Hearts of Iron IV. Please see the instructions page for reasons why this item might not work within Hearts of Iron IV.
Current visibility: Hidden
This item will only be visible to you, admins, and anyone marked as a creator.
Current visibility: Friends-only
This item will only be visible in searches to you, your friends, and admins. 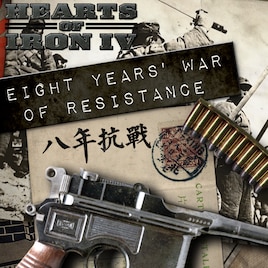 WanNiang
Last Online
See all 109 collections (some may be hidden)

Join our Discord Server[discord.gg] for more info and updates!
A Submod that replaces the blue, hand-written font if you don't like it.
A Submod that uses the default main menu if you're having issues with the menu.
Try resubbing if you are experiencing crashes on start.
A Patreon Tip Jar[www.patreon.com] if you want to support the project.


Eight Years' War of Resistance started off as a mod that aims to slightly adjust the Asian Theater of World War II, but eventually grown into an overhaul mod that focus on the region of East Asia and South East Asia. This is a renewed release of the project. The mod aims to create an in-depth, historical, polished and fun experience for you to enjoy.

New historical nations are added in the Asia along with unique skins, events, focus trees, decisions, unique tech and dynamic news interface. Asian majors, namely China and Japan, have been reworked extensively. More extensive and historical focus trees are added along with new advisors, events, and decisions. A great amount of new graphics are added, and efforts are made to ensure the icons have a quality and style similar to the vanilla ones.

Playability
◆ Current Nations w/ National Focuses:
– Japan, China, Communist China, Sinkiang, Indochina, Mongolia, Manchukuo, East Hebei A.C.
(Will be Collaborationist China later)
◆ Current Nations w/o completely unique National Focuses but are playable and have flavors:
– East Chahar, Pailingmiao Council, Northeastern Army, Burma, the Warlords (WTT only).
◆ Note:
– If you want to play as Reorganized Nationalist China, play as the
East Hebei Autonomous Council to form it.
– If you want to play as Mengjiang, play as East Chahar autonomous region.
Prince Demchugdongrub will defect to you later.
– If you want to play as a Suiyuan warlord, play as the Pailingmiao Council. You get to choose
to either defect or stay loyal to Nanking in an event. Choose stay for the warlord.
◆ Known issues:
– There are a couple unfixable broken tooltips. Does not affect gameplay.
– A few unguarded provinces might switch control when a puppet state is created by Japan.
Affects minimal gameplay.

Unique Skins & Tech Variants
For most warlords and Japanese client states, new custom skins and tech are added, adding more flavor to the game. Most of these are even available without Waking the Tiger DLC!

Ideology
This mod adds a new ideology Socialism. The ideology has its own political advisers and political decisions. In addition, ideology "non-aligned" is now renamed "reactionary". World tension thresholds for it are reduced and some other limitations are removed.

Supply Condition and Inflation
This mod add in a new mechanic Supply Condition to represent war exhaustion. Your infrastructure, divisions, occupation, factories and stability will all affect your supply condition. And it will affect your war support and several army stats. Along with supply condition, there's also a Inflation mechanic for all countries. Inflation occurs when stability is too low for your trade law.

Partisans
As communist china, a new Partisan mechanic is introduced. You can unlock it after completing the Partisan Offensive focus. It is represented with the yellow bands in the screenshots, and you can do various operations in those regions!

Q: Does this mod require Waking the Tiger DLC to work?
A: No. However, due to Paradox's ToS a fair amount of content from this mod are unavailable without the DLC. As a result, it is recommended to turn on the DLC for the full experience of the mod.

Q: Does a warlord still get a new focus tree when it takes over China?
A: Yes. 2 new focus trees are specifically designed for that purpose. One for nationalist warlord, one for communist warlord. This however, is unfortunately only available with Waking the Tiger DLC.

Q: Playing as Communist China, the nationalists kept declaring war on me!
A: Do the Contact Zhang Xueliang focus as quickly as possible. That will block the nationalists from directly attacking by setting up tacit truce with them (represented as a DMZ in the game.)

More Q and As regarding Historicalities.

Huge thanks to Wanniang, the author of the East Focus mod
The prototype of this mod is based on roemer9’s Better Realism Project, which I partially participated in. Although this mod has developed very differently from his mod, it won’t be here without his mod. The foreign advisors part was created by me, then later reintroduced to his mod. Also, the portraits of the mod is mostly adopted from VictorXoda’s Black & White Portraits.
Some portraits are adopted from A Portrait Mod by Brutus Mars.
Thanks to 田銀時 (袁銀)-TW for reworking the skins!
Credits to the Darkest Hour mod team for allowing us to develop on its dynamic news event headers prototype.

Thanks for the support from our Patrons!
◆ Anton Dunker
Popular Discussions View All (7)

When is it Being Updating to the Newest Version
MoralityStrikes

伞柄@在下宋承苟，敢问阁下？ 2 hours ago
The AI Japanese will not provoke war in latest version.I tag the Japan and found it seems like Japan couldn't select the left-side focus tree.
I ticked "Historical AI focus".

Natt  [author] Jan 15 @ 4:03am
I tweaked the AI a bit so they would be more historically accurate, glad you like it!

Crispin Jan 15 @ 2:39am
And Germany lost, or at least had a stalemate with Soviet in the late 1943. Something I have NEVER seen before. What changes in this mod could make that happen? I love it.

Crispin Jan 14 @ 11:29am
Yeah I noticed that white russian thinng, intriguing indeed. My only worry is that it will further strengthen the already op Germans. I wish I had a mod this good for Europe as well :D Also I just noticed Mongolia, looks very cool.

Natt  [author] Jan 14 @ 11:26am
@Crispin
Yeah you can't but you can gain cores on outer Manchuria and wreak havoc within the Soviet Union! (There is a somewhat strong focus for that path, feel free too try it out!) You also get to do a lot more fun stuff than the Qing restoration path, such as negotiating with foreign investors and switch Newspaper UI to name a few.

Natt  [author] Jan 14 @ 11:22am
@Depressed Violinist You mean the robber baron thing? Well Kung was kinda a robber baron, but he did contribute to the country back then as well. I just thought it would work ok as a trait heh, no politics intended really.

Crispin Jan 14 @ 11:12am
What a fantastic looking mod. After finishing a slightly modded version of darkest hour hoi2, with playing Manchukuo as allied to japan(to avoid island hopping) I was hoping to do the same here, but afaik there is no way to get cores on china if you remain loyal to Japan?