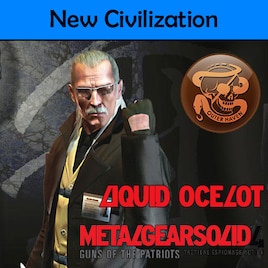 This item has been added to your Subscriptions. Some games will require you to relaunch them before the item will be downloaded.
In 1 collection by Vicevirtuoso
Vice Virtuoso's Metal Gear Solid Civilizations

Adds Liquid Ocelot's vision of Outer Heaven from Metal Gear Solid 4 as a Civilization. It is militarily focused, only being able to settle new cities with its unique Great General replacement. However, these new settled cities gain bonuses normally not given to new cities. Combine the unique bonuses from your new cities into a powerful army, then throw the world into as much war as you can to stay in a Golden Age! 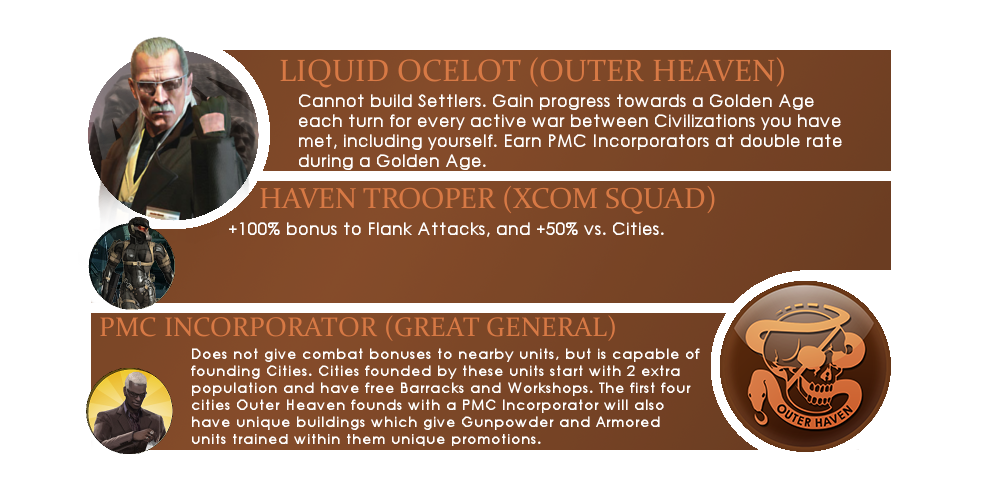 *Sharp Keening at 40 Decebels* Aug 25, 2017 @ 5:56pm
Just a suggestion, could you make the haven trooper's models the same as the stealth operative, just without the shield.

M@x Mar 24, 2016 @ 11:39am
Quick advice for other users, if you start in a later era, don't use the extra settlers, as their cities will not have the special buildings.

Shalashaska Dec 24, 2015 @ 3:41pm
Alright, Thanks for the answer. Other than no unique models this civ is pretty good and fun to play as.

Oh and you're also pretty good at making modded civs.

Vicevirtuoso  [author] Dec 24, 2015 @ 3:05pm
@Hammersmith
Not a bug, just that I have only relatively recently gotten competent at importing 3D models to the game. Might see MGS4 model imports for this one, but it will be a long time before I update this one again; it's in my bottom 3 favorite Civs I've ever made :/

Shalashaska Dec 20, 2015 @ 11:43am
Found a bug, the PMC Incorportator and haven trooper uses the Great General and XCOM models. Is this intended?

Vicevirtuoso  [author] Aug 21, 2015 @ 1:22pm
@shawnlewis52
Not by itself, BNW is required for all of my Civs with the exception of the shitty old version of the MSF that I wish people would stop subscribing to.
< >