Store Page
Hearts of Iron IV>  Workshop > KubiG's Workshop
This item has been removed from the community because it violates Steam Community & Content Guidelines. It is only visible to you. If you believe your item has been removed by mistake, please contact Steam Support.
This item is incompatible with Hearts of Iron IV. Please see the instructions page for reasons why this item might not work within Hearts of Iron IV.
Current visibility: Hidden
This item will only be visible to you, admins, and anyone marked as a creator.
Current visibility: Friends-only
This item will only be visible in searches to you, your friends, and admins. 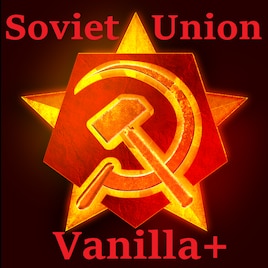 KubiG
Offline
See all 97 collections (some may be hidden)

This item has been added to your Subscriptions. Some games will require you to relaunch them before the item will be downloaded.
Description
Soviet Union Vanilla+
This mod expands the default Soviet Focus tree with 40+ New Focuses, New Design Companies, Vehicle icons and some new flavor Ideas and Events, and lastly it considerably Improves Soviet AI. It also modifies many vanilla Focuses to be more useful, or at least not take so terribly long to finish (Like anti-fascist diplomacy).

This mod also includes Finnish Continuation War event chain, which will drag Finland into a second war with USSR, on the Axis side.

Some Highlights:
New Alternate Trotsky Branch – allow you to start a civil war manually and get Trotsky. It permits greater diplomatic flexibility and sending more volunteers, at the price of industrial buildup.

Continuation War – once Germany starts the 'War with USSR' Focus, an event fires, which allows Germany to offer Finland help in case they attack USSR as well (They have to agree to all this. Much more likely to agree if they've lost Karelia)
If you successfully defeat Finland as USSR, another Event chain will fire which allows signing a separate peace.

* Expanded Great Patriotic War focus tree branch – including both military actions and industry.
* Stalin's Organ Focus = Katyusha Rocket Launchers – unlocks both the technology and a template with Rocket Launchers. Initially small, it can be improved upon to use as a highly mobile offensive force.
* New event and a Focus will allow you to get Medium and Heavy tanks II ahead of time.

New starting Soviet Ideas
Workers' and Peasant's Red Army – This permanent idea gives bonuses to Winter Acclimatization, reduces winter attrition, increases mobilisation speed, but reduces max. Planning.
Politicized Research Bureaus – SU starts with 4 research slots! But research is slowed considerably by strict communist rules, some Focuses can alleviate the negatives.
Overconfident Command – This idea represent the initial overconfidence of communist leadership in their Red Army, and fear among senior officers due to ongoing purges, causing reluctance to adoption of new doctrines and technologies. It is removed by getting involved in a war, or automatically by high World Threat.

AI Improvements:
General Changes:
* Greatly improved and optimized Construction, Production, and PP spending
* AI will use better and more efficient templates
* AI will produce a lot more aircraft and more tank divisions
* Added many 'What If' and 'Do NOT' AI Scripts to prevent it from doing a lot of stupid things and improve how it plays. (Like declaring war on Germany, while already loosing to a poor Poland)

Fixes:
- USSR won't stay at Infantry Weapons 1 for eternity.
- USSR won't take Service by Requirement immediately for no reason
- AI will respect the Molotov Pact and not send volunteers to Allies
- AI will use „Order 227“
- AI will stop building dockyards like a madman (still, some unfixable cases exists)
- AI won't justify wargoals against Poland, instead of just taking the Focus they have for that
- Soviet AI won't be so mean and won't justify against Finland 1 day after they had peacefully given them the Karelia
- AI in historical mode won't take some focuses that would lead to an early war against the Allies, if Germany had been dealt with already (after 1948 this no longer applies)

Changes worth mentioning:
- USSR starts with Limited Exports (USSR was almost closed economy historically)
- Starts with T-35 tank, Marines, and Kirov Cruiser researched (non-MTG)
- Historical AI now takes a different Focus branch, which is modified slightly (Positive Heroism)
- Rebalanced 'developement' of many USSR states - adding some 30 extra building slots in total (considering how large some soviet states are & to make Central Asia habitable, on the other hand some got their slots reduced)
- Applied many small changes to starting Soviet navy, according to this thread[forum.paradoxplaza.com]
- Added Sovetsky Soyuz battleship template and some upgraded airplane variants for 1939 start
- 'Offer protection to Poland' gives Poland a Guarantee (if they agree)
- added custom description to most Soviet tanks (english only)
- Many small changes to vanilla focuses

Remarks:
My goal was to make the Focus Tree longer, nicer looking, while maintaining historical accuracy, and make the AI more competent, where possible.
Soviet AI can finally hold out on its own, quite reliably, so playing Allies isn't so frustrating and Germany so boring.

If you have any ideas on what to improve, what is missing or what is not balanced, I am open to suggestions. If you find some bugs, please report them to me.

Known Issues:
Soviet AI Navy sits idle in ports – because, they're trying to merge and reinforce through the various canals, such as the Bosphorus, which is usually impossible. Paradox bug which I can't fix.

This is superior modding, comrade.

Uniqwue Jul 21 @ 8:58am
is this ironman compatible

KubiG  [author] Apr 26 @ 6:54am
What mod do you have in mind? I've been thinking of making a version compatible with extended 1960 tech mod. But you can also just delete the Technology folder inside the mod (in 'common' directory). But the launcher may redownload the file later, IDK.

sad man Apr 25 @ 2:34pm
could you possibly remove or make a version of this where the tech tree changes are removed so that it is compatible with tech tree mods

happy thoughts Apr 22 @ 5:06pm
Yes, he does want to translate this mod to Russian. Hit me up if you need a hand with this, Учусь играть. Else, please keep us all updated

KubiG  [author] Apr 18 @ 8:42am
Учусь играть I can't speak russian, you want to translate the mod to russian?