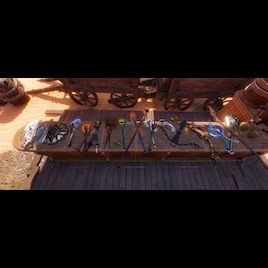 This is my first Mod! I've been playing Divinity a fair amount and started testing and using most mods in the workshop. There were a lot of mods I really enjoyed and some of them incorporated their own unique weapons. I really enjoyed hunting down these unique weapons but noticed there was a lack of build options available that utilized most of these Uniques. So I decided to try to make my own mod that opens up these build options in interesting ways while trying to keep them in line with other Uniques throughout the game (Might need your help with that).

This mod currently adds 28 new Uniques to Act 1, 39 to Act 2, and 47 to Act 3, aimed to compliment various build paths and options throughout your adventure. While this may sound like a lot, I have gone to decent lengths to hide many of them, so you will have to brush off your easter egg hunting skills to find them all. These Uniques will also level with your party once you have reached their base level, allowing you to make use of them for quite a while throughout the game.

While I won't tell you where they are or what stats are on each of them, I will provide the name and class of each weapon below as a form of checklist (and so you know that said Unique is a part of this mod and not another).


This mod is compatible with existing save files.

As of 9/16/2020, this mod has a full dependency on Norbyte's script extender, found HERE[github.com], If you do not have the extender, many of the new items in the accessory expansion will not work as expected!
I have made an attempt at a Divine War patch located Here. Try it out and let me know how it is.

With the Act III expansion, I have decided to move the list of Uniques to a Google Spreadsheet since it was starting to get rather lengthy.

Some of these Uniques are hidden in plain sight, others will require some extra effort to locate.

Some mods that I'd personally recommend to compliment this mod are:

My other mod, Gravewalker Class [DE]
Has some similarly coded Lord of the Rings Uniques.

Level Up All Equipment - Including Uniques [Definitive Edition]
To level up the rest of your equipment and vanilla Uniques as you desire.

Feenex's Battle Pack: Definitive Edition
For some interesting classes and a handful of Uniques that also level with your party.

OdinCore - Mod Services
Odinblade's many class overhauls. Many of the items here were designed with odin builds in mind.


Hope you enjoy the mod and happy hunting!
Popular Discussions View All (7)

@Malchezzar maybe put that link in the description somewhere

Back to Black Apr 12 @ 1:14am
@Malchezzar I have a question about Celebrimbor's ring: i perfectly know his location, i already played with your mod and i know that you need telekinesis to get it, but i cant find it now...can't light it in any position. Has his location changed?

Malchezzar  [author] Jan 4 @ 8:31am
@Clown Fiesta No, I don't allow such lists to exist on the mod page since it goes against the Easter Egg Hunt style theme of the mod, but there was a reddit post made ages ago that had some of the item locations listed, I don't know if it had the later acts in it or not.

Clown Fiesta Jan 4 @ 4:38am
Is there a list of locations where I can find all those weapons?

SaintCrazy Dec 3, 2021 @ 7:54pm
Personally, I find that these give you a major power boost especially early on. Between the free spells granted and stat boosts I felt like I had to hang on to them for a long time.

However despite being a little on the OP side, it's not too gamebreaking IMO. It does add a lot of interesting and unique options and I'm having fun with it. However it's worth mentioning that I couldn't get the Sourcerous Sundries upgrading to work on them.. though that may have been for the best balance-wise.

291055472 Nov 27, 2021 @ 6:15am
Dear Malchezzar, I have a small favor to ask: It would be MOST appreciated if you can just put the list of the uniques on some other site besides Google docs , as you know some part of the planet just don't have access to some certain websites, and It's realllllly annoying and frustrating :(