Greenlight > Games > DIGITILUS's Workshop
Greenlight is being retired. For more information on how to submit games to steam, refer to this blog post.
This item has been removed from the community because it violates Steam Community & Content Guidelines. It is only visible to you. If you believe your item has been removed by mistake, please contact Steam Support.
This item is incompatible with Greenlight. Please see the instructions page for reasons why this item might not work within Greenlight.
Current visibility: Hidden
This item will only be visible to you, admins, and anyone marked as a creator.
Current visibility: Friends-only
This item will only be visible in searches to you, your friends, and admins.
SKYJACKER
Description Discussions5 Announcements5 Comments600 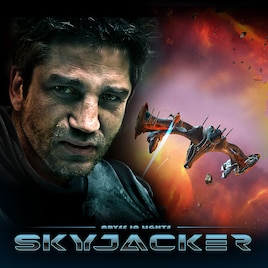 DIGITILUS
Offline
See all 103 collections (some may be hidden)
Kickstarter
Recent Announcements View All (5)
Meet the most dominant and powerful cruiser in SKYJACKER called God of War:
November 18, 2013 - DIGITILUS

Let us introduce you to the most dominant and powerful cruiser in SKYJACKER game, called God of War.

Hello, and welcome to our next announcement!

And finally... the video to describe YTG STRIKE group in Free Flight mode:

http://youtu.be/0GRDGsyvZ4c
Read More
Description
Release date: Third quarter 2014
SKYJACKER is a first person, free-roaming space simulator that offers intense combat through mercenary missions that have starship pilots hijack, destroy and loot enemy vessels. Players take control of one of the most ruthless pirates in the galaxy, Ael. SKYJACKER’s physics and extensive spaceship customization abilities give space enthusiasts freedom to go beyond the stars like never before.

BE A SPACE PIRATE!

You start on the bottom of the Pirate Stock Exchange and work your way up to the top, not by deliveries and fetch-quests, but through brutal work such as assassinations, sabotage, looting, kidnapping, robberies, infiltrations and extractions.

SKYJACKER features a story campaign with a variety of missions and objectives (not just a string of turkey shoots). Your friends can co-op as alien wingmen for the entire campaign or you can solo it offline with AI assistance, whatever you like.


We are planning to release the toolset we are currently using campaign creation. The Mission Constructor consists of the art assets and design framework you need to create remarkable scenarios, everything you need to implement your vision without writing a single line of code. Whether you want to write your own stories or see who would win in a fight, we've got you covered.

SKYJACKER is based on the "Abyss Lights" book series written by our lead, Eugene Zhukov. The story focuses on a lone human in a galaxy of conflict - abducted by aliens, raised by pirates, wanted by privateers and mercenaries alike.


No matter what you choose to play the SKYJACKER universe is in details that unfold around you. There are ten significant alien races, each with unique biological features, social structures, interlocking histories, and star faring technologies. Some are industrial, some organic, and a few biotech that literally farm their spaceships in deep space.

We have developed a radical set of visual designs that differ from typical reliance on classic cubic forms and we’ve also got the talents of composer Krzysztof Wierzynkiewic ("Witcher 2" and "Bulletstorm") to help bring out the colors of space.

– THE TEAM –
Digitilus, LLC is a small SoCal independent game studio co-founded by two space aficionados. We work around the clock to bring the incredible world of SKYJACKER with superb space combat sim experience to life. We still have a lot of work to do but we want to get SKYJACKER into your hands as quickly as we can! We are very excited about the future of SKYJACKER and hope you will love the game!
Popular Discussions View All (5)

Looks better then eve.online if you wane be a competitor with them.
[BLA]Unmortal

i like dirt bikes, so why should i play this game???
BLACK PEOPLE

weltall_of_id Nov 29, 2015 @ 12:15am
Last update on here 2013? Last update from the dev January 2014? Game site copyrighted 2015? I deduce that the developer could not even for a joke release the game when promised, so instead of canceling it and moving on, he decided to go silent and keep working on his pace, skipping the annoying part of replying to all the people that have been waiting like crazy for this game.
< >