Store Page
Arma 3>  Workshop > [OCB] VALOUR's Workshop
This item has been removed from the community because it violates Steam Community & Content Guidelines. It is only visible to you. If you believe your item has been removed by mistake, please contact Steam Support.
This item is incompatible with Arma 3. Please see the instructions page for reasons why this item might not work within Arma 3.
Current visibility: Hidden
This item will only be visible to you, admins, and anyone marked as a creator.
Current visibility: Friends-only
This item will only be visible in searches to you, your friends, and admins. 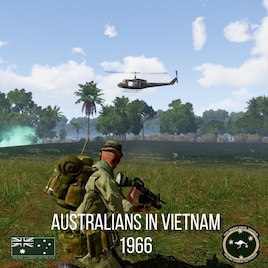 [OCB] VALOUR
Offline
See all 12 collections (some may be hidden)

This item has been added to your Subscriptions. Some games will require you to relaunch them before the item will be downloaded.
Description
Australian Troops are deployed in Vietnam at the 1st Australian Task Force base at Nui Dat in the Phuoc Tuy Province.

They are engaged in a counter insurgency against the Viet Cong. The Australians have resources sufficient for the task, but it's not an easy fight.

The village of Long Tan isn't far away, and the rubber plantation is also nearby. There is some sketchy intel that a large enemy formation is moving towards the task force base. Your platoon will have to investigate.

You will be fighting against Viet Cong and North Vietnamese Army units. The tasks are challenging so this mission is best played by larger groups. It can be played with smaller groups or even single player with the assistance of recruited AI troops.

Mission is based on the Unsung Vietnam mod. There is a recreation (as best as I can replicate it) of the Battle of Long Tan. There are manually added tasks (indicated by normal task markers on the map) which you can select and complete. There are also automatically generated tasks that are indicated by a circle containing a red X. To force a mission to change, visit the base mission flag and select "force next mission".

Thanks to the following Script and Mod Makers whose work I have included in this mission.

Come and join us for a game: https://discord.gg/011FdobxKcaUgnDyl - we can assist you with mods if you are having issues.

Mission design takes time and a lot of work. If you enjoy my missions please consider supporting my work.
https://www.patreon.com/ocb_au

Thanks to Online Combat Battalion for their ongoing support for my mission projects.
< >
24 Comments

AussieSAS300278 Jan 23 @ 3:21pm
all good now i figured out what i had done wrong i had a blonde moment and had not download all the mods that you need too make it work haha.. so on the up side the little bit ive played of it so far its a awesome mod definitely will recommend it too my mates when they get arma 3

[OCB] VALOUR  [author] Apr 1, 2020 @ 4:26pm
There is an officer near one of the buildings in the spawn area. Go near him and you'll see "Recruit Infantry" come up as an option on your screen. Select that, then choose the units you want to recruit from the list that comes up.