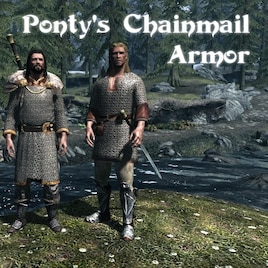 Ponty
Offline
See all 123 collections (some may be hidden)

This item has been added to your Subscriptions. Some games will require you to relaunch them before the item will be downloaded.
Description
Adds 2 chainmail armor sets to the game. There is a heavy and light version (Chainmail Hauberk and Chain Shirt respectively), as well as Light and Heavy Coifs with Helms (based off guard helms), Mail Backed Gauntlets (based off the clothing gloves), and Mail Boots (based off the fine boots) which have the stats of Steel Plate/Scaled but are slightly lighter. They're retextures of existing models, the Emperor's outfit and one of the generic 'clothes'.

Before you go prattling on about how the armor values for the hauberk are unrealistic, I made it have those stats for 2 reasons:
- (Fairly) easily attainable by a lower level character
- Still quite a strong armor type, so it is useable by even higher level characters without it becoming completely redundant or a liability.

I'm not all too happy with how the female versions turned out, so if you have any suggestions about what I could retexture instead that would be great.

Now there are a few issues at present -
There's minor issues with the female model - for some reason there's a small break between the neck and body, no idea what caused this since I simply retextured onto an existing Bethesda model. If you've any idea how to fix this let me know.
The male hauberk's sleeves will clip with just about any hand items you use. I've added mail mittens/boots to remedy this.
The inventory/world texture for the hauberk is pretty screwed up, don't know what caused this. The worn model is still fine.

Thanks to many of the subscribers for their suggestions and such, keep them coming and you'll probably see it in a future update!

Leave a rating and don't forget to check out my other work!

Duntrune May 15, 2015 @ 1:58am
The heavy chain is just what i needed for my Vampire. He's an Imperial Noble so the armor suits him well. I like the way people comment on what i'm wearing in the streets: "A definite lords choice."

steve220 May 8, 2015 @ 3:55pm
Just what I needed. I have a mod for Glass level chain, but now I can get it earlier. I might mod this to make lower level mail.
I should also add that this also works well with my Bosmer Full and Half capes from another mod.

BullBars1 Aug 3, 2014 @ 12:56pm
Does all the chainmail sets have possibles pouch and coin pouch attached to the belt?
Have you tried using the Nordic cuffed gontlet for fit withese armors?
I think a Monk's hood with the scarf draped down the back would look pretty cool on this armor.
< >