Greenlight > Games > Lonely Kids Studio's Workshop
Greenlight is being retired. For more information on how to submit games to steam, refer to this blog post.
This item has been removed from the community because it violates Steam Community & Content Guidelines. It is only visible to you. If you believe your item has been removed by mistake, please contact Steam Support.
This item is incompatible with Greenlight. Please see the instructions page for reasons why this item might not work within Greenlight.
Current visibility: Hidden
This item will only be visible to you, admins, and anyone marked as a creator.
Current visibility: Friends-only
This item will only be visible in searches to you, your friends, and admins.
SoundBurst!
Description Discussions1 Announcements1 Comments49 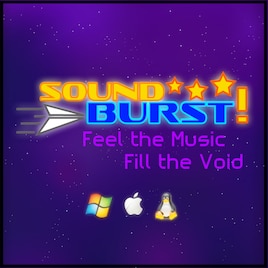 Music is a key part of the gameplay of "SoundBurst!".

The SoundTrack is the work of our close Friends from The Mapples[soundcloud.com].

Here are a few demos of the tunes paving the Journey:

There are quite a few musical types in the Game, enough to satisfy most, according to us.

"SoundBurst!" is a Musical Arcade Game coming to PC/Mac/Linux.

Switch Tracks with your little Ship, Catch all the Stars coming your way and Pulse them to harmonic smithereens to get Score and Expand the Music, revealing new Musical Palettes and Flavours.

Most everything you do triggers Sounds linked to the Musical theme of the Level you're travelling through, bringing you closer to the Ultimate Blossom of the Tune.

Completing Levels and Recreating the Music will give you access to new Musical Worlds filled with Groovy Challenges bringing the Musical Experience even further.

Nothing you can't deal with if you know how to use a Keyboard or a GamePad though.

"SoundBurst!" is our first production as the Lonely Kids.

Our very first goal was to focus on a single Core Gameplay that would seamlessly intertwine with Music.

The Game changed quite a lot during the past few months, but the initial intention has remained, and we've ended up with a solid Design built around some of the things we love most about Video Games :

We're really satisfied with the rather unique blend of elements we managed to bring together, cohering into a responsive and rewarding Gameplay Easy to Enjoy and Fun to Master.

The SoundTrack is the work of our close Friends from The Mapples[soundcloud.com].

Here are a few demos of the tunes paving the Journey :

We want to offer "SoundBurst!" at a price we deem both reasonable and fair. The way we see it, Fair to the Players and Fair to Us is key in guaranteeing everyone’s satisfaction, that's why we're going with a $5 retail price.


Thanks for your time,

Feel free to drop by anytime.

Chebz Mar 31, 2014 @ 12:05pm
looks neat, but demo video didn't inspire me. Music(?) in the video is kind of weird and feels like this will get annoying very quickly. How about trying to find some badass music, then perhaps this has more potential.

Zowieanna Zanthia™ Dec 4, 2013 @ 1:56am
Little music note's instead of stars may look a hole lot better and more beat changes, as with typical music of the modern world today, this is truly a unique piece of work,hope this helps.
< >