Store Page
Garry's Mod>  Workshop > NuclearGhost's Workshop
This item has been removed from the community because it violates Steam Community & Content Guidelines. It is only visible to you. If you believe your item has been removed by mistake, please contact Steam Support.
This item is incompatible with Garry's Mod. Please see the instructions page for reasons why this item might not work within Garry's Mod.
Current visibility: Hidden
This item will only be visible to you, admins, and anyone marked as a creator.
Current visibility: Friends-only
This item will only be visible in searches to you, your friends, and admins. 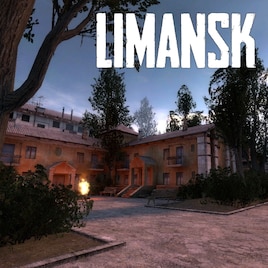 NuclearGhost
Online
See all 2902 collections (some may be hidden)

This item has been added to your Subscriptions. Some games will require you to relaunch them before the item will be downloaded.
Description
RP_LIMANSK_CS

For a long time no one heard anything about that town. Many folks don't believe Limansk ever existed. Only they're lying: the town exists - I saw it with my own eyes before the first disaster. You see, there was a closed institute there, a real big one, with houses built specially for scientists and their servants. It was a research institute with some fancy name...something like Radiowave. They put up a huge antenna too, the size of a five-story building! Real intellectuals, those fellas. Only there was never any peace in Limansk. Its residents were always cagey, suspicious of strangers. Always muttering something under their noses and praising the Soviet regime, even when we had provision shortages. We countryfolk used to go 'round Limansk - the people weren't exactly hearty, and the town kinda made your head hurt...must have been the antenna. Then Chernobyl happened, but Limansk was not even evacuated. They might have screwed something up in the documents, or maybe it was all that secrecy, I don't really know. But that was the last I heard of Limansk. I've got no business there.
This map is a recreation of the original level from S.T.A.L.K.E.R. : Clear Sky. Map have a bit different look of some locations. Original level from S.T.A.L.K.E.R. Clear Sky by GSC Gameworld.

Your average Gnaar Sep 13 @ 4:05pm
Welcome to Limansk, The town that time forgot.

RecklesFlam1ngo Oct 16, 2019 @ 10:29pm
The lighting is a bit weird at certain angles/areas on this map, like fullbright has been turned on for certain surfaces. Apart from that fantastic map!