Store Page
XCOM 2>  Workshop > Artek [General]'s Workshop
This item has been removed from the community because it violates Steam Community & Content Guidelines. It is only visible to you. If you believe your item has been removed by mistake, please contact Steam Support.
This item is incompatible with XCOM 2. Please see the instructions page for reasons why this item might not work within XCOM 2.
Current visibility: Hidden
This item will only be visible to you, admins, and anyone marked as a creator.
Current visibility: Friends-only
This item will only be visible in searches to you, your friends, and admins. 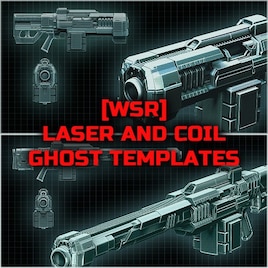 XCOM 2: War of the Chosen
Required items
This item requires all of the following other items
[WOTC] WSR Weapon Skin Replacer - Core
Created by

Artek [General]
Online
See all 261 collections (some may be hidden)
You need DLC to use this item.

This item has been added to your Subscriptions. Some games will require you to relaunch them before the item will be downloaded.
Description
Creates ghost templates of LW2 Laser and Coil weaponry to be used by WSR.
No research to waste Tygan's time, no schematics to suck your resources, no items to clutter the inventory.
(You wouldn't want them anyway, since i think i accidentally butchered the stats, leaving only cosmetic functions intact)

I was mid-campaign, using other mods with WSR, when Tygan approached me saying that he just wanted to think REALLY hard about laser weapons and how sexy they are for 9 days.
He also couldnt think of Plasma Weapons until he got it over with.
So i nuked my campaign and made this mod.
Sorry Tygan, i know you really like those laser weapons (and i completely understand), but your time is way too important for this.

Weapon template names are provided in mod's ReadMe file.
Example of WSR code is provided in a relevant discussion thread.

No issues found so far and hopefully it will stay that way.

COMPATIBILITY
Might have conflicts with any other mods that attempt to add LW Laser / Coil weapons.
Key word: might.
Popular Discussions View All (1)

PINNED: Copypaste code for those new to WSR (and just to save time, maybe)
Artek [General]
< >
35 Comments

Legend+TwitchMod(13Crusader13) Feb 21, 2021 @ 4:03pm
hopefully for only contain coil standalone version,
because just for faster loading+less lag even with SSD.
guessing can 600mb reduce to 300mb

Artek [General]  [author] Feb 14, 2021 @ 2:05am
No idea since i have no idea what LWOTC does. If it has laser and coils in it already - then probably not. This is a purely cosmetic mod for vanilla game and it might easily conflict with any mod that attempts to add the same categories of weapons.

HATERADE Nov 27, 2020 @ 3:07pm
I'm still trying to learn (desperately) WSR so that I don't have to bug everyone with this stuff, but I figured, since it's in your pack you'd want to check it out for the sake of consistency.

Artek [General]  [author] Nov 27, 2020 @ 3:01pm
The problem is i never used modded upgradable pistols, so the need for their attachments never crossed my mind.
Checking the text files i cant find any refferences to their achievements, but that doesn't say much - i could easily overlook something.

HATERADE Nov 27, 2020 @ 2:42pm
I thought the Pavonis Interactive models had everything?

Legend+TwitchMod(13Crusader13) Oct 16, 2020 @ 10:34pm
SMGs also included. I made the game think they're just rifles.
/// that mean don't need download SMG mod?
---
sadly this mod not Separate Laser and Coil. when people(actually me lul) use this mod with coil-plasma replacer, there unusing laser data consuming loading speed

Artek [General]  [author] May 11, 2020 @ 1:16am
That's because they're not meant to be in this mod. This mod creates ghost templates of weapons, that are completely ignored by the main game - you can't research, purchase or find them anywhere. They exist solely to be butchered by Iridar's Weapon Skin Replacer.

In other words: this mod is a weapon skin mod with extra steps.
< >