Greenlight > Games > MrBenjammin's Workshop
Greenlight is being retired. For more information on how to submit games to steam, refer to this blog post.
This item has been removed from the community because it violates Steam Community & Content Guidelines. It is only visible to you. If you believe your item has been removed by mistake, please contact Steam Support.
This item is incompatible with Greenlight. Please see the instructions page for reasons why this item might not work within Greenlight.
Current visibility: Hidden
This item will only be visible to you, admins, and anyone marked as a creator.
Current visibility: Friends-only
This item will only be visible in searches to you, your friends, and admins.
Sky Nations
Description Discussions14 Announcements22 Comments330 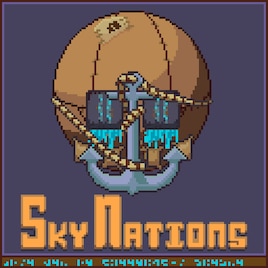 MrBenjammin
Offline
See all 51 collections (some may be hidden)

View Sky Nations in the store

Update 0.6 is out and with it comes a bunch of gameplay features and some new stuff exposed to the Mod API[skynations.net].
Parachutes have been added allowing a safer descent to the ground if you happen to lose your footing. Parachutes are now default gear and are given to you when you first enter a server or use the reset block. Jetpacks are also in which allow you short travel between cliffs and platforms with a boost bar that refills on landing. Both these items use a new slot in the equipment window called the backpack slot.

Artillery Cannons are also new which are the equivalent to the Iron Cannons however they can be manually aimed like Mounted Repeated allowing for much more precise shots during battle using the same ammo as their predecessor.

Missile Pod Missiles have been changed a little, they will no longer damage protected land of the Nation that owns the Missile Pod that fired them. Meaning they won't break your own things! They will also speed up over time while chasing their target.

Much of the UI art has been remade to make it much cleaner and slicker with more sane text colours being used making it easier to read. Something I hadn't time to do until recently but makes a huge difference to interacting with the game.

How to update
Clients will be updated automatically be the launcher for the website version and automatically in your Steam library for the Steam version.

You can download the server update here[skynations.net]. To update your pre-existing server. Make a backup of your files. Then just copy and paste the files in the new server zip over your current ones you're running the server from. It's as simple as that!

For those that use custom scripts via the modding API for their Servers if you're familiar with Mercurial you can use it to merge your scripts with the changes for 0.6 via this repository:
https://bitbucket.org/MrBenjammin/sky-nations-scripts/

Update 0.5 is finally out and with it brings some major changes to gameplay and some more subtle changes. Nations can now claim Systems for themselves. Once a System is claimed it's marked the on the in-game map as your Nations and becomes protected. Protection prevents players from outside of your Nation placing, editing or interacting with blocks in the System owned by you. However they can still be damaged by weapons such as Cannons. A claimed System has a Nation Beacon created in the middle when it's claimed. This is a largish structure that unusually has it's own health bar, which you simply need to hover your mouse over to view. Attacking this and destroying it will lose the claim on the System and it's protection will be nullified. The beacons have quite a lot of health and will regenerate it's health during downtime.

To go with the above changes, Ships have also received similar protection. To protect your ship you need to grab a Ship Protection Field block which can be purchased currently from Merchant Cat. Once placed these will protect your ship from placing, editing and block interactions(most blocks) by players not in your Nation. However if the SPF is destroyed then this protection will be lost.

The last thing you need to know about the new protection is that Copper Defense Guns have been remade into Copper Missile Pods. These essentially work the same but fire slow removing projectiles with trails so you can pro-actively seek out their origins and destroy them when attacking a System. Instead of the previous situation of them being very hard to locate. They can also only be placed in claimed Systems, pods that currently in exist in non-claimed areas will be inactive. They do a lot more damage to players now and are subject to future balancing.

Borders preventing you from sailing too far out from the Systems have also implemented. They are fairly far out so they don't limit your movement during combat. For a full list of all changes check out the Change Log below.


The client updates are already deployed for the Launcher and Steam. Unusually the server files are out right away. You can grab them on the download page:
http://skynations.net/?page=download

If you're hosting a server check my twitter for updates on fixes that we may come across during first day of the update so you can stay up to date with fixes.

Read More
Description
Release date: Third quarter 2014
Sky Nations is a multiplayer sandbox game set in a world of floating islands and air ships. Players can construct air ships as they adventure across procedural maps full of different islands and structures. Each island type containing different materials and loot which can be crafted into useful items for your ship and character. Players can band together to form Nations in order create bases and fleets of ships cooperatively and fight in large scale battles with other Nations and lone pirates.

Features
Development
Sky Nation is still in development and there is a lot more to come in each bi-weekly update. All updates will be free during development of the game until it is completion. The game has been in development for around 2 years. It was created and is developed by one developer and was released in it's alpha state to the public on June 23rd 2013. Since then it has received and will continue to receive major updates every 2 weeks, allowing the community to bring direct feedback on mechanics and improve the game as grows towards it's finished state.

Try it!
The game is currently available on a bunch of other platforms where you can purchase and play it right away. You can find them on the website:
{LINK REMOVED}Buy Now

There is also a FREE {LINK REMOVED}demo with limited features.

Please Note: This is not a Minecraft mod. This game was built from scratch and the focus of the game is pretty different. I wrote a fairly lengthy post on why not all games that use blocks are 'Minecraft rip offs'. {LINK REMOVED}You can check it out here.
< >
330 Comments

Dzordanas Jun 30, 2014 @ 10:46pm
I used to play this a lot. Now I've spawned in and the whole server (or spawn) is griefed to fuck I dont know how any mechanics work eeeeiiiiiiikkKK!!!!

Sky Nations has been Greenlit and is now listed in the Steam store. For the latest information, purchase options, and discussions for Sky Nations, please see it on the Steam Store or in the Steam Community.
Visit Store Page
For more details Visit Community Hub
For latest discussions
If you really, really want to, you can continue to the Greenlight page. Information on this page may be out of date, since all the action has moved to the areas noted above.