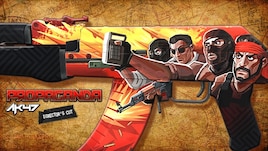 Medic!
Offline
See all 16 collections created by Puffin (•⌔• ) and other people (some may be hidden)
In 1 collection by Puffin (•⌔• )
Red Moon Collection
76 items
Description
Hello and happy CS20! After a lot of calls in the community to tag the original Propaganda for the CS20 event, upon revisiting the original skin we realized it was quite rough around the edges and could be improved a ton. We created it years ago so we've learned a lot since then. So a complete remaster was done, theming it properly to our favorite iteration of the 1.6 Terrorist crew and doing major refinements. This is a total overhaul with the Director's Cut version. We will also be releasing a partner skin with a different theme, coming soon!

Thank you guys for the feedback on the original and hope you guys like it! Had a lot of fun rebuilding this from scratch and making it better. Check out some of our other goodies below!