Store Page
ARK: Survival Evolved >  Workshop > UGZ's Workshop
This item has been removed from the community because it violates Steam Community & Content Guidelines. It is only visible to you. If you believe your item has been removed by mistake, please contact Steam Support.
This item is incompatible with ARK: Survival Evolved. Please see the instructions page for reasons why this item might not work within ARK: Survival Evolved.
Current visibility: Hidden
This item will only be visible to you, admins, and anyone marked as a creator.
Current visibility: Friends-only
This item will only be visible in searches to you, your friends, and admins. 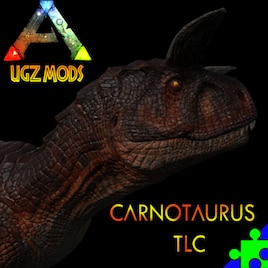 UGZ
Offline
See all 1053 collections (some may be hidden)

This item has been added to your Subscriptions. Some games will require you to relaunch them before the item will be downloaded.
Description
------Big shoutout to UpFromTheDepths for the mod’s trailer. Be sure to check him out-------

Completely converts the vanilla carnotaurus into a new TLC’ed version with new abilities, animations, and a new model as well as a new aberrant version =)

The new carnotaurus has the same stats as previously with a minor boost to its top speed. It now has new mechanics which include a goring headbutt that can be used while charging, a roar that can scare away small creatures, and most notably a tamed carno will passively scare aware wild raptors. While approaching top speed it’s gore attack will increase in damage output giving survivors an edge in hit and run combat.

*A modified carno tlc saddle can be learned at the same level as the normal carno saddle and crafted in player inventory. You can find new saddle bps rarely by killing wild TLC Carnos


Please consider joining my Patreon to support my me and my mods =) for as little as $1: https://www.patreon.com/UGZ


Join my Discord to talk to me: https://discord.gg/VRMdgZH

Model and Base Textures: Commissioned from Garuga123, huge thank you towards his modeling skills

Big thanks to any other person who helped in any way whether it be feedback,screenshots, or other =)

Reba Mcentire Gaming May 10 @ 2:55pm
i hope to see this mod be updated again. probably one of my favorite dino mod

slhope Mar 15 @ 4:18pm
Is TLC carno supposed to be so slow while walking? Even with 180% speed it's pace is slower than classic carno's.

Squidy720 Mar 8 @ 6:51pm
whenever the Carnos die the ragdolls start glitching out and its funny.

Master Oogway Feb 9 @ 6:57pm
One teeny suggestion, make the alpha carnos tameable with kibble only. Or something hard to get.

Nubkakes Jan 18 @ 3:07pm
Is there any way to disable the Aberrant version spawning on all maps without aberrant creatures?