Greenlight > Games > RetroMasters's Workshop
Greenlight is being retired. For more information on how to submit games to steam, refer to this blog post.
This item has been removed from the community because it violates Steam Community & Content Guidelines. It is only visible to you. If you believe your item has been removed by mistake, please contact Steam Support.
This item is incompatible with Greenlight. Please see the instructions page for reasons why this item might not work within Greenlight.
Current visibility: Hidden
This item will only be visible to you, admins, and anyone marked as a creator.
Current visibility: Friends-only
This item will only be visible in searches to you, your friends, and admins.
Trap Them
Description Discussions2 Announcements4 Comments43 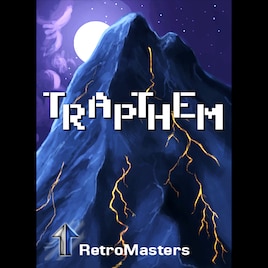 RetroMasters
Offline
See all 15 collections (some may be hidden)

View Trap Them in the store

Thank you guys very much for appreciating Trap Them. We are happy to announce that the windows version of the game is scheduled to release on July 10th.

The windows version of TrapThem is already available on Desura.

Read More
Description
RetroMasters is an independent game developer with an elaborate focus on interesting gameplay, rewarding depth of play and technical quality.
Trap Them is a unique and refreshing action puzzler!

Trap Them revolves around technical and demanding puzzle gameplay about outsmarting and trapping the enemies while avoiding being trapped yourself. This game introduces innovative block physics and all main mechanics early on instead of accumulating new systems you have to learn. So the challenge is to get better in what you are already using.


What players on Desura say:
" This is a fantastically inventive puzzle game.
There really hasn't been made anything like it before.

The basic idea seems like an inversion of "Boulder Dash", which means the dig-able soil is not static but instead affected by gravity. As you play you will realize the immense possibilities of these mechanics. You will need to build complex structures to your aid, and demolish them in turn to murderous effect(because although the name is TrapThem, you mainly just SquishEm). One could say it puts "Red Faction's" "GeoMod" to shame, if the meagre graphics are ignored.

The stages are devided into 3 types: purely cerebral tasks, reaction tests and amalgamations of both; with the reaction tests at times being unattractive for pure puzzle-lovers.

I have played every stage and can account for the quality of their design. The game demands both creativity and intellect in great amounts(as well as finger-skills, which isn't as remarkable though). Gameplay doesn't go stale at any time, seemingly familiar looking challenges prove to be fresh just by means of a minor twist or added restrictions. Later stages will easily make you invest an hour at least, and a few are likely to make you despair for a while; but they all are solvable, I promise.
It needs to be said that overcoming these positively "impossible" preconditions will fill you with a deep sense of satisfaction; at one point when all the established core-techniques fail to solve the problem you will be led to utilize your environments in such ludicrous ways that you wouldn't deem them feasible in theory, you have to try.
This is something you cannot have with the wishy-washy "Portal" games for instance, which made "TrapThem" the more enjoyable experience for me.

So the game is majorly taxing, which is all a logic-enthusiast could wish for. But even more importantly, the game demonstrates a uniqueness highly uncommon today, it isn't derivative in the least.

"TrapThem is a fantastic game.
Most of the levels demand creative solutions which make puzzling over them really fun. It is highly diversified regarding the solutions of the different levels. If you like to explore the astonishing combinational depth of good matching gameplay elements in over 100 Levels TrapThem is the right game for you. "

"Wonderfully made puzzle game. Was waiting anxiously for this after playing through the demo several times. "


"Really nice and addicting puzzler. I hope that a leveleditor will be added in later versions to create own challenges. "

Trap Them has been Greenlit and is now listed in the Steam store. For the latest information, purchase options, and discussions for Trap Them, please see it on the Steam Store or in the Steam Community.
Visit Store Page
For more details Visit Community Hub
For latest discussions
If you really, really want to, you can continue to the Greenlight page. Information on this page may be out of date, since all the action has moved to the areas noted above.