Store Page
Brawlhalla > Guides > TM06™'s Guides
This item has been removed from the community because it violates Steam Community & Content Guidelines. It is only visible to you. If you believe your item has been removed by mistake, please contact Steam Support.
This item is incompatible with Brawlhalla. Please see the instructions page for reasons why this item might not work within Brawlhalla.
Current visibility: Hidden
This item will only be visible to you, admins, and anyone marked as a creator.
Current visibility: Friends-only
This item will only be visible in searches to you, your friends, and admins.

How to Diana
By TM06™ and 1 collaborators
This guide will talk about how to play Diana, the pros and cons of her kit, and basically how to use her. I made this guide because of the amount of toxic (in chat and in-game) Diana players I've encountered far too many times, and instead of complaining, I want to educate others on how to play her.

Introduction And The Basics

Comments
Introduction And The Basics
"Just spam sigs, right?" Well, not really. There is a skill requirement. Diana has gotten more hate then she deserves because of the horrible minority of people who are more toxic than a nuclear dump site, but are so vocal that they seem like they're everywhere and all of the people who play her are this bad. However, this is simply not true. I know I can never make people less toxic, but as I said in the flair, I want to make people more aware of how to actually play her. I should also note that this guide will not tell you exactly what to do, as that generally defeats the point of a guide, which is to give you a GUIDEline but allow you to make your own choices. Now, onto the basics.

Diana is a Bow/Blasters legend with a very balanced stat spread of 5 attack, 6 dex, 5 defense, and 6 speed. She focuses on range, precision and strings and her weapons encourage a read-heavy play style. Her signatures are excellent all-around with their fast startup, good frame data, decent to good range and exceptionally high force. She has ample approach options with large disjoints that she can easily abuse in order to get in and make a massive punish or start a long and damaging combo. Her best approach options are Bow Dair, Bow dLight, Bow sLlight, Blasters falling Sair, Blasters sLight, Blasters dAir, and occasionally Guns dLight. You can mix up your approach options with dashes however you'd like so long as it works!

Attack and speed are arguably the least useful due to them not providing something more than Diana has while lowering her other stats. Dexterity is the best if you prefer an offensive playstyle due to the combo paths it opens, but one has to play a bit more carefully due to the increased chance you have to be KO'd. Defense is the safest and best option in my opinion, as the stat lowering has negligible effects on force and damage while making her harder to get KO'd.
Toolkit: Bow
Diana's bow is her flagship weapon that is the more used of her two weapons. 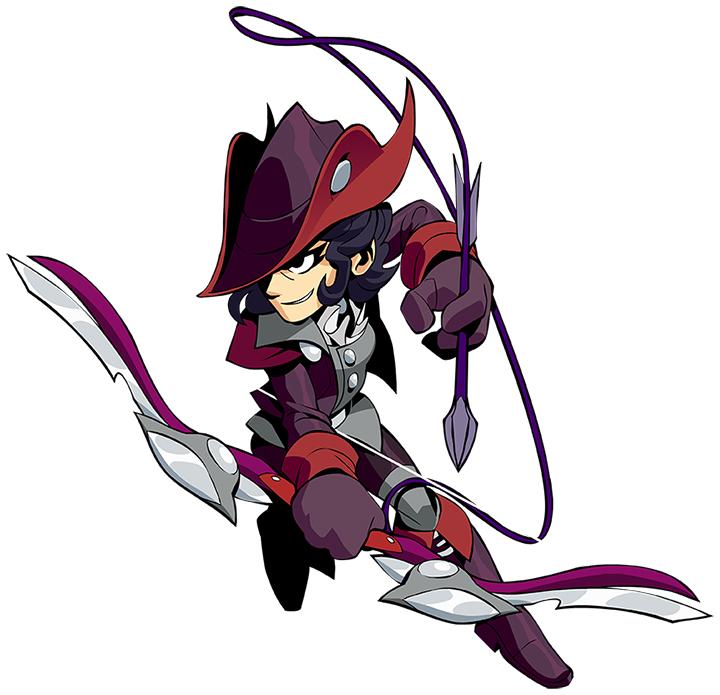 Let's go over why it's considered as powerful as it is.

Nsig is a great tool with good range, a large hitbox and great force. Diana will hold her bow behind her back with her other hand extended. She will then leap upwards and swing her bow forwards in a downwards arc. If the attack hits, she will quickly shoot an arrow tipped with a quicksilver bomb and launch them away. The sig has very fast startup and low ending lag, while also covering a good distance and having a surprisingly active and deceptive set of hitboxes. Dlight can also chain into it, with a ludicrous 3 frame dodge window minimum. If the enemy has recently airdodged and is at a high percent, it's the best option to kill thanks to the safe Dlight-Nsig combo.

Ssig is her most notorious signature, and with good reason. It has fast startup, great range, large hitboxes, and kills at stupid early percents. Diana will take a quick step forward, hold her bow behind her back and diagonally from her head. She will then Spin the bow quickly while moving forwards, to a spin herself, then swipe upwards with the still spinning bow. The reason why this move is so hated is because of how early you can kill with it, and how easily Flight can combo into it. At the edge of Shipwreck, Flight-Ssig will kill almost anyone at 100, or medium orange. While the sig itself cannot kill until around 130, the Forward movement of Flight combined with the distance Ssig travels puts the opponent closer to the blast zone, making them an easy kill. However, it is very laggy and the Flight-Ssig combo can be dodged out of by dodging upwards, away, or up and away from or towards Diana. The hitbox will still catch you if you dodge inwards, and spotdodging is the same.

Dsig is a short range combo tool that puts the enemy in a very bad state and can set up for an edgeguard scenario. Diana will stand up straight and hold her bow behind her back. She will then Swing her bow upwards. If the move hits, she will shoot a grapple arrow into her opponent and swing them in the opposite direction. The move itself is very fast and a very potent read option, while also killing quite early thanks to its great force. However, it lacks range compared to Diana's other options and doesn't kill as early either. The hitbox used to be a lot larger and used to start behind Diana before BMG fixed that.
Toolkit: Blasters
Diana's Guns are very solid overall. Let's go over them.

Nsig is a long range spacing tool that has great kill power and a deceptively large and active hitbox. Diana will throw a quicksilver bomb into the air where it will hover for a short time. She then fires a single regular shot into the bomb, causing it to explode. This option is best used as a tool to punish jumping opponents or as an airdodge punish. Keep in mind that it halts all of Diana's momentum, so slide charging offstage will cause her to fall straight down.

Ssig is Diana's best move in her kit. It has very fast startup, far range, killing power comparable to her Bow Ssig, and low ending lag. Diana will crouch and hold one of her guns forwards and the other behind her head. She will then do a jump while flipping and fire shots downwards as she falls. Unlike similar moves, every shot Diana fires has a hitbox. This allows it to cover not only a large horizontal distance, but high vertical distance as well. It is a great follow up for Dair-Fair, as you can do a dash after landing the combo and follow up with the move, and it has a very high chance of killing.

Dsig is a very potent tool with far range, good startup and solid killing power. Diana will hold one of her guns parallel to her head and the other behind her back. 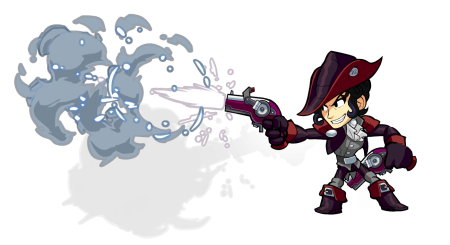 She will then fire two shots from the guns and shoot a grapple out of another one when the move hits, launching them in the opposite direction. The move is a very solid X-pivot option or can be reverse slide charged to cover the ledge. Be weary that it has a decent bit of ending lag.
Combos And Strings
Legend: X will refer to the alternative options between Nair, Sair or Nlight, as these options are often interchangeable. GP stands for Ground Pound. DJ stands for Dash Jump. CD stands for Chase Dodge. GC stands for Gravity Cancel.

Thanks for checking out this guide, and i hope you enjoyed it or found some use in it! It would give both me and Greasie some nice help if you rated, liked and shared the guide if you did enjoy it or found it helpful.
- TM06 And Greasie
< >
8 Comments

Snowfox Oct 25, 2019 @ 3:40pm
I havent gone against a Diana who didn't use Nsig as a crutch. More people need to read this than your probaly think