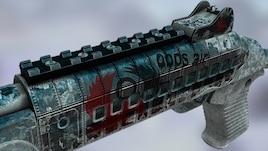 Debski
Offline
See all 8 collections created by Quzga and other people (some may be hidden)
In 1 collection by Quzga
Quzga's Custom Skins
48 items
Description
Inspired by one of the first maps [counterstrike.fandom.com] I played in Counter Strike as a kid, it might not be the best map in terms of gameplay but I remember how much fun I had running around those snowy tunnels having firefights from up high and running through the tiny little town.

The main inspiration as you can see is the crashed airplane, we took some liberties to make it more interesting and not just be a full on replica. Some parts of the gun is made to look like it's been covered in snow, the icy tops is inspired by the ice crystal/walls in some areas of the map (Shown in reference images)

We feel it's somewhat of a forgotten map even though it was in CS very early on (1.3). Many people looking at this page might have never seen or heard of the map before but as someone who became nostalgic just loading into this map again, I hope you all like it :)

Storyline: In a heavy snowstorm a plane carrying a top secret load gets in trouble. The onboard guard has parachuted to safety. They recover the crashed plane and start unloading the cargo into a captured truck. But the weather plays a second trick as heavy snowfall prevent the SWAT team from getting the entire cargo over to the truck.

Terrorists have tracked the plane as well and, in an attempt to prevent the SWAT Team from escaping with their valuable load, they set a plan to bomb the two possible locations of the load.