Comments
Traits Overview
Each character can have different traits. However only one trait can be active at a time for every character. Different characters can have the same trait active at the same time though.

Each trait belongs to one trait type and there are 8 different trait types.

Characters can gain new traits by opening red chests in field maps, completing their side quests or romancing them. Some DLC traits can be gained by wearing their DLC costume, other traits can be unlocked post game by finishing extra events from Alfriede.

Each trait type, with the exception of Human and Solo types, has a hidden xp for each character. Different traits of the same type on the same character share the same trait xp.

Which bonds are created depends on 3 factors :

Like traits , bonds come in 7 different types and each bond type is generally associated with a trait type.

The bond types are :

Dragoneer bonds is similar to Rival-type and can also recover MP. Associated with Dragoneer traits.

Love bonds can have effects like other type of bonds. Associated with Love traits.

Negative bonds is a double-edged swords. It can give benefits but also gives debuffs or inflict status effects on characters. Doesn't associate with any traits.

With the exception of Negative bonds, all 6 bond types have level represented by the circles below the bond name in the bond diagram. The higher the level then the bond will have stronger effects.

Bond's level is determined by the total number of equpped associated trait's level from the characters that formed the bond in the bond diagram.

The trait type level can be seen in bond diagram represented by the number of blue circles under the character's bond names. Note that if the character doesn't have the associated trait type equipped, the blue circle will not be seen. 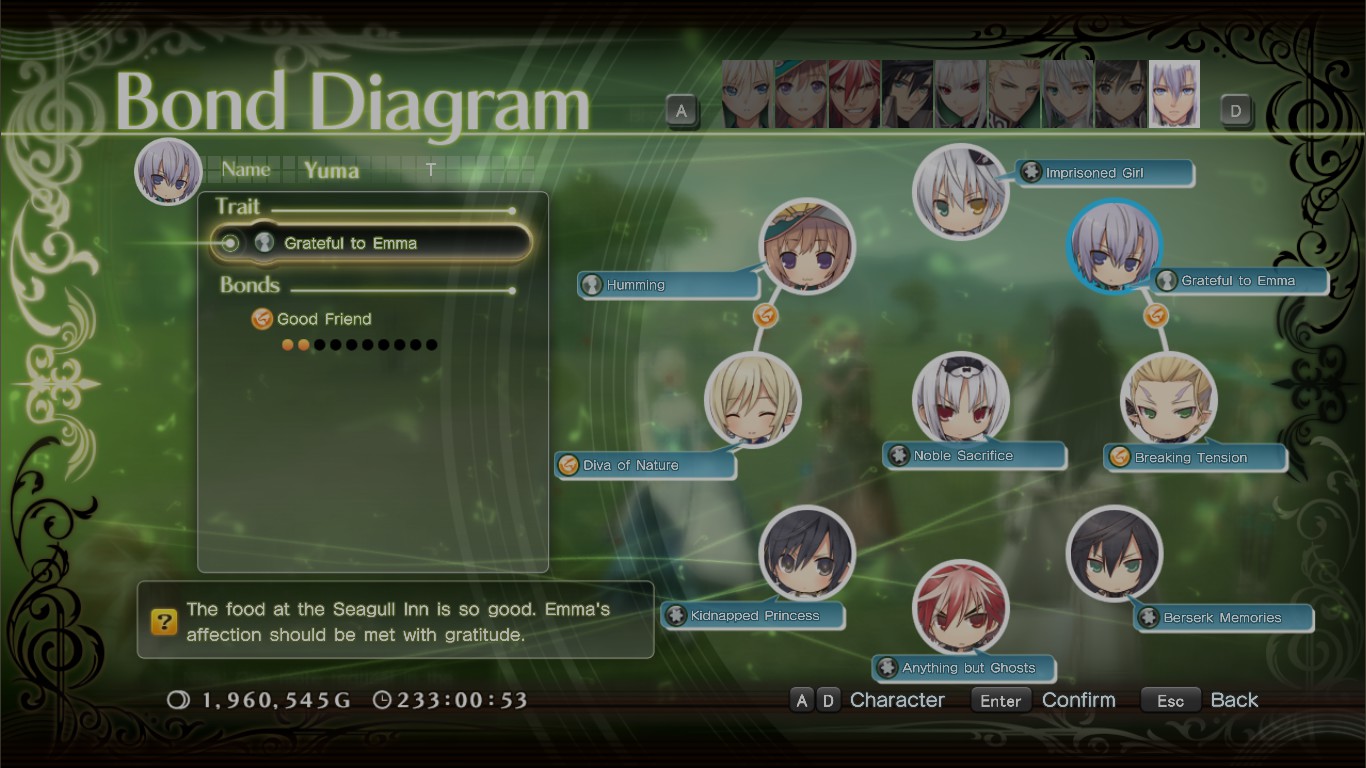 Here, there's a Friend Bond that has a level of 2 shown on Yuma's screen. This is a total of the active Friend trait type level from the characters that formed the bond.

If Yuma equip a Friend Trait, then the strength of the bond is increased to 3. 1 each from Yuma, Kirika and Lestin. In Yuma's screen, the circles under the bond name also show 1 blue circle and 2 yellow circle. The blue circle indicates Yuma's equipped Friend Type Trait level and the total number of circle show the level of the bond. This change can be seen in the next screenshot. 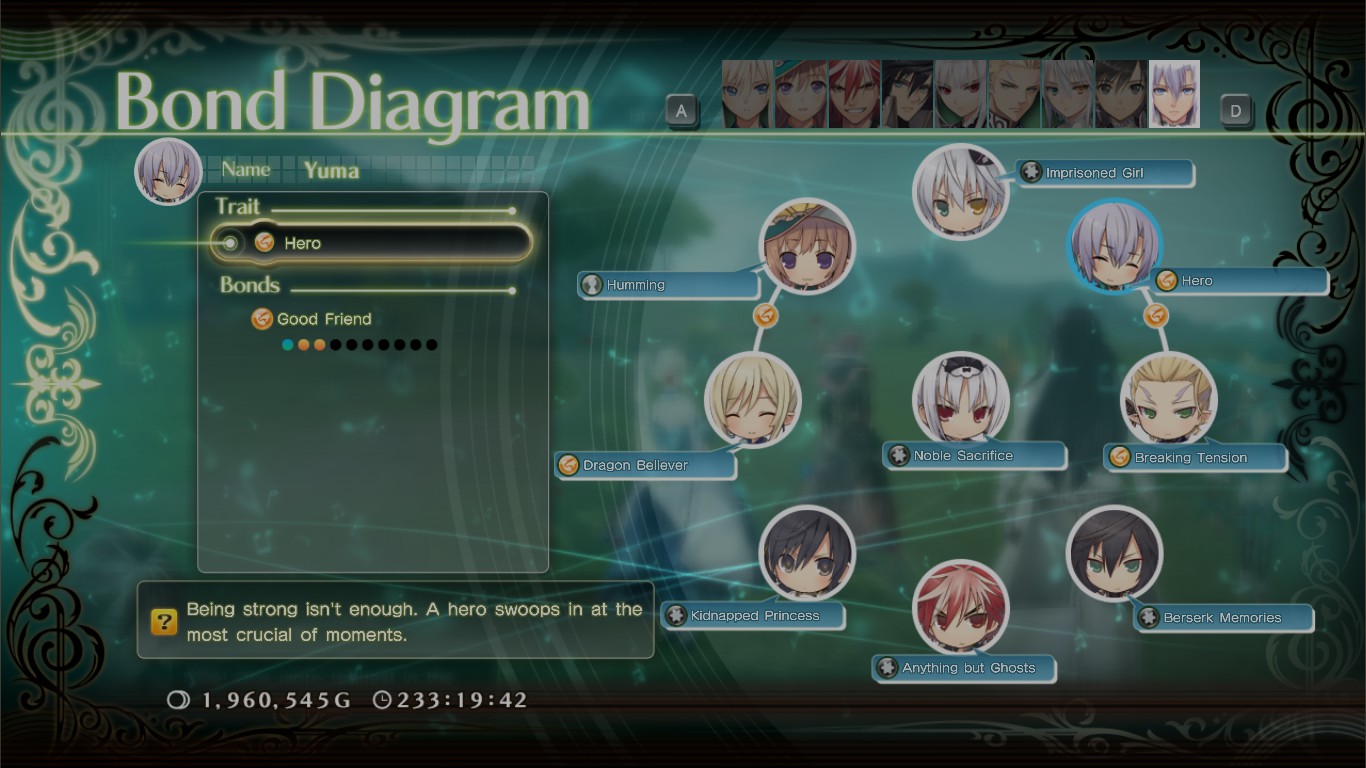 Due to this system, it's possible that a bond can become "Dormant" or possibly "Dead".

A Dormant bond is a bond that will not increase its level unless specific character - trait combination is used. An example of this is Sweet Fragrance, a Friend Bond that's created by pairing Sonia's Scent of Black Hair (HumanType) with Yuma's Any Trait.
This bond can "stuck" with 0 level if its paired with Yuma's non Friend Type Traits.

A Dead bond is a bond that's forever stuck at 0 level, because no combination allow it to be created using its respective associative trait type.

Bonds Combination Overview
Based on the combinations of traits to result a bond, they can be split into 2 categories : General Bonds and Special Bonds.

General Bonds, which where most bond combinations result are, are bonds that are created by combining Trait Types instead of Specific Traits. The combination also usually works in reverse. So a combination between Friend x Human is the same as Human x Friend.

In these 2 Bonds, Lestin is involved in both. But since he's not the target of the 2 Love Bonds, the Triangle Bond wil not appear.

The same situation is also true when Agnum changed his Trait to Burning Battleaxe from the 1st example. Since Lestin is now the target of the 2 Love Bonds, 1 from Agnum and 1 from Yuma, the Triangle Bond will also appear.


Positioning in Bond Diagram
How the characters are positioned in the Bond Diagram may affect what Bonds will be created. This is especially true for combinations that results in 2 possible Bonds result.

if Kirika has Maiden Handkerchief equipped and Rinna also has Sudden Enchant Trait equipped, then there are 2 different Bond that can be created from the combination.

It all depends whether one of them is placed in the center spot in the Bond Diagram or not.

Let's start with the one with both of them is placed around the center spot.

For easier explanation , let's mark the surrounding spots on the Bond Diagram wiith the letters A - H. 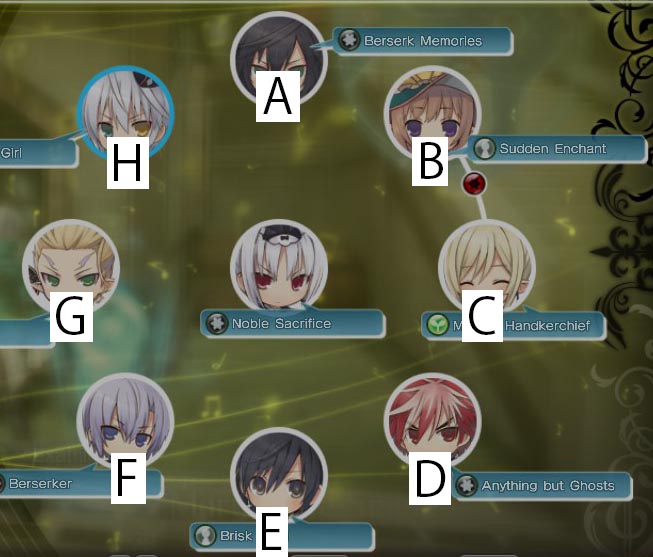 If the characters are placed at the border of Group 1 and 2, A - B or E - F, then the character who are placed in Group 1 (Spot A or Spot F) always determines which bond are created.

It's a different order if one of character is placed in the center spot of the Bond Diagram.
In this case , the spots surrounding the center spot has to be separated into 2 groups :
Group 1 is spot A - C & H, while Group 2 is spot D - G.

For Group 1 : The character at the center spot determines which bond are created. So if Kirika is placed at center and Rinna at one of the spot in Group 1, then the bond created is Not to Rinna. If their position is reversed the bond created will be About Lady Kirika.

For Group 2 : It's the opposite of Group 1, the character placed at the surrounding spot determines what bond are created. So if Kirika is placed at center and Rinna at one of the spot in Group 2, then the bond created is About Lady Kirika. If their position is reversed the bond created will be Not to Rinna.

Fukuyasu  [author] Mar 15 @ 1:25pm
No, Diva&Servant is a dormant type. If Kirika uses any support trait, it will become active.

JamesDreemurr Mar 9 @ 4:43pm
is Diva&servant supposed to be a dead bond?

ChaosQueen713 Jan 3 @ 12:16am
I am still so confused about bonds in this game.
Which are the best bonds to have and use?