Store Page
Crusader Kings II>  Workshop > Pelinal's Workshop
This item has been removed from the community because it violates Steam Community & Content Guidelines. It is only visible to you. If you believe your item has been removed by mistake, please contact Steam Support.
This item is incompatible with Crusader Kings II. Please see the instructions page for reasons why this item might not work within Crusader Kings II.
Current visibility: Hidden
This item will only be visible to you, admins, and anyone marked as a creator.
Current visibility: Friends-only
This item will only be visible in searches to you, your friends, and admins. 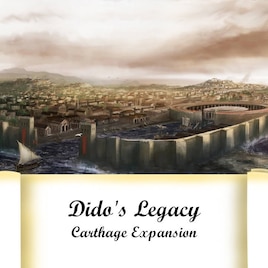 Pelinal
Offline
See all 112 collections (some may be hidden)
You need DLC to use this item.

This item has been added to your Subscriptions. Some games will require you to relaunch them before the item will be downloaded.
Description
Overview
Version: 1.16, for CK2 3.3.*
Change Log
>> HIP Version Here <<

This mod is meant to be played from 769 AD
Just over a century has passed since the fall of Carthage during the Umayyad Conquest of Africa, and 3 groups of Carthaginian refugees still live on to this day. Their ancestors fled during the chaos of the siege of Carthage and have set up new realms; one under the Byzantine territory of Mallorca, another under the Umayyads in Spain and the only independent bastion of Punic culture in the Maghreb.

Will you lead one of these men who follow a dying religion and practice dwindling traditions? Will Carthage be born anew at the hands of this doom-driven survivors?

Features
- Over 240 new events for punic/canaanite characters
- New mercantile society for punics
- Reformable canaanite religion
- New religious doctrine for child sacrifice; ‘Moloch’s Flame’
- New characters: Suffete Gisco of Siga, Count Hasdrubal of Menorca, Sheikh Ahirom of Almeria
- Unique kingdom and empire to form
- 3 new bloodlines can be created
- Can recover the lost relics of Hannibal Barca
- New Aztec and Javanese weapons/armour
- New Punic-specific artifacts such as the Sign of Tanit and Tyrian Robes
- Cultural feast, summer fair, runestones and canaanite pilgrimage
- Can dedicate temples, similar to Hellenics
- Can embark on a legendary journey to other continents
- New reworked building system for Old Semitic and Canaanite characters
- Can restore the Port of Carthage wonder in Tunis
- Can restore the Temple of Melqart wonder in Tyre
- Event chain to bring back the North African Elephant
- Conquest events for Rome and the former Carthaginian territories
- If you own Phoenicia, you can revive Phoenician culture
- Option to play as either a merchant empire or feudal
- On parents’ death you can construct a sarcophagus
- Can restore trade hegemony in the Mediterranean
- New Phoenician Marines mercenary band
- New Tanitguard holy order
- 2 new unit types: Phoenicians and Sacred Band
- Sacred Band and Sacred Band Cavalry retinues
- Unique warrior lodge for elephant riders
- Can discover the truth of the Abrahamic religions
- New 'Imperial Republic' government type

Future Plans
From here on out, the only support this mod will likely receive will be in the form of bug fixes and small (and I mean small) content additions. This mod is not actively being added to anymore as we'd like to expand our portfolio more.

Bugs you have found
Mullac2001

AgedWisdom Sep 11, 2021 @ 6:05am
Since CK3 has been out for a while I don't know if you're paying attention to this mod, but the government frames for this mod seem to be corrupted as they cannot be opened up in as a .dds file in paint unlike every other .dds file in the gfx folder.

Klongu Ignorant Slave Dec 20, 2020 @ 9:30pm
Great mod, but the punic/phonenician culture interfere with each other. I can't build the port of Carthage if im Phonecian, only if i'm punic.

PrideOfAssam Oct 14, 2020 @ 7:50am
@pelinal glory be to you and your house. i shall sacrifice 2 of my children in your name. Ball hamoon be praised