Greenlight > Games > Blaze Epic's Workshop
Greenlight is being retired. For more information on how to submit games to steam, refer to this blog post.
This item has been removed from the community because it violates Steam Community & Content Guidelines. It is only visible to you. If you believe your item has been removed by mistake, please contact Steam Support.
This item is incompatible with Greenlight. Please see the instructions page for reasons why this item might not work within Greenlight.
Current visibility: Hidden
This item will only be visible to you, admins, and anyone marked as a creator.
Current visibility: Friends-only
This item will only be visible in searches to you, your friends, and admins.
Shin Samurai Jazz
Description Discussions0 Announcements1 Comments81 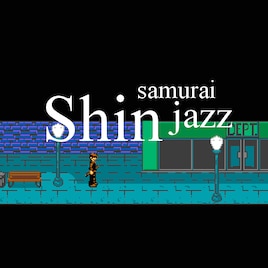 Blaze Epic
Offline
See all 17 collections (some may be hidden)

Click here to go to the store page and pick up a copy for $0.99 USD. If you have purchased the game through my home page, IndieGameStand, Desura, or Lazy Guys Studio Late February Bundle, your Steam key will be made available to you very shortly if it is not available to you as of posting.

Lots of thanks for everyone's support!

Read More
Description
Release date: December 11th, 2013
Shin Samurai Jazz is a platform-adventure game. It combines the likes of film noir and samurai cinema, presenting them with 8-bit graphics, an electro-jazz soundtrack, and a comic/manga-like style creating a unique atmosphere.

Unlike it's predecessor, samurai_jazz, Shin Samurai Jazz features jumping mechanics inspired by chuunori, an old technique used in kabuki theatre to give the illusion of flying. It's combat mechanics are more combo-based with the ability to juggle enemies and perform mid-air combinations also inspired by chuunori. While the adventure elements remain intact, the puzzles are more complex with varied level designs and enemy placements/attack patterns that make use of the game's mechanics. And while the game retains that 8-bit vibe, regenerating health and infinite lives/continues are fairly implement to relieve players of some of that Golden-Era frustration.

RowdyOne Feb 26, 2015 @ 7:04pm
VOted as well, especially if it's much the same as samurai_jazz (but improved, obviously) it's a Must Buy for me if it ever manages to get on Steam

Shin Samurai Jazz has been Greenlit and is now listed in the Steam store. For the latest information, purchase options, and discussions for Shin Samurai Jazz, please see it on the Steam Store or in the Steam Community.
Visit Store Page
For more details Visit Community Hub
For latest discussions
If you really, really want to, you can continue to the Greenlight page. Information on this page may be out of date, since all the action has moved to the areas noted above.