Store Page
Space Engineers>  Workshop > Spaceman Spiff's Workshop
This item has been removed from the community because it violates Steam Community & Content Guidelines. It is only visible to you. If you believe your item has been removed by mistake, please contact Steam Support.
This item is incompatible with Space Engineers. Please see the instructions page for reasons why this item might not work within Space Engineers.
Current visibility: Hidden
This item will only be visible to you, admins, and anyone marked as a creator.
Current visibility: Friends-only
This item will only be visible in searches to you, your friends, and admins. 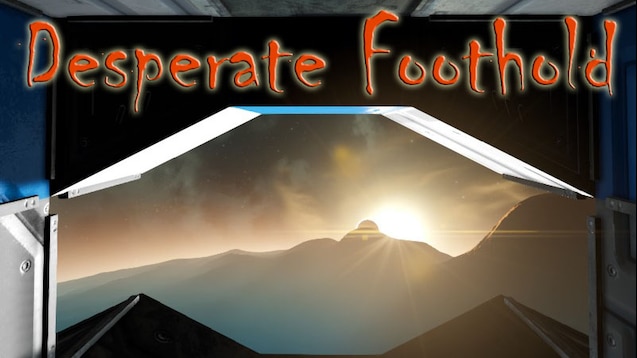 Spaceman Spiff
Offline
See the collection (may be hidden)

This item has been added to your Subscriptions. Some games will require you to relaunch them before the item will be downloaded.
Description
Desperate Foothold is a survival scenario where you are challenged to overcome a difficult situation while evading the constant threat of hostile forces and operating with limited mobility. Being a highly trained space engineer, however, your motto is taken from the space marines: "Improvise, Adapt, and Overcome."

BACKSTORY
Pirates have always been a hostile force in this universe, but their recent encroachment upon facilities and personnel from your home planet has forced leadership to take the fight to them. As a senior space engineer, your specific mission was to establish a foothold on their home planet with expanding infrastructure from which you could launch counterattacks on their facilities and ships. Unfortunately, your leadership grossly underestimated their strength and resolve, and your entire fleet was either destroyed or boarded and seized as plunder. You managed to make it to a survival pod, grabbing a rifle and significant quantity of ammo before being forced to eject or be captured. You chose to eject, not wanting to leave your fate in their savage hands.

You take with you the knowledge for building Nanite constructors and shield generators, as well as many other components such as refineries, assemblers, reactors, and the remaining necessary infrastructure for operating a self-sustaining base. Unfortunately, your jetpack took some damage during your evasion and escape, so its capabilities are severely affected; it is essentially inoperable on the planet, and of limited capability in space (zero-g).

OBJECTIVE
Build a planetary base that is viable and sustainable in a very hostile environment. The base should have ore gathering and refining capabilities to allow for further expansion, defensive capabilities, and medical and living facilities. Be mindful that building a shield generator requires platinum, an ore that is not found on planets, so if you desire shields for your base and/or ships you'll need to build or acquire a ship capable of space flight to either bring back ore or carry enough resources into space to set up a remote refining facility for the purpose of refining ore so you only needing to carry back ingots of much lesser mass. (Mining and refining uranium would also eliminate the need to protect the large planetary wind and/or solar farms required to operate your base.)

You are encouraged to build shields for any ships that you use to increase their survivability.