Greenlight > Games > SM Sith Lord's Workshop
Greenlight is being retired. For more information on how to submit games to steam, refer to this blog post.
This item has been removed from the community because it violates Steam Community & Content Guidelines. It is only visible to you. If you believe your item has been removed by mistake, please contact Steam Support.
This item is incompatible with Greenlight. Please see the instructions page for reasons why this item might not work within Greenlight.
Current visibility: Hidden
This item will only be visible to you, admins, and anyone marked as a creator.
Current visibility: Friends-only
This item will only be visible in searches to you, your friends, and admins.
Anarchy Arcade
Description Discussions129 Announcements35 Comments859 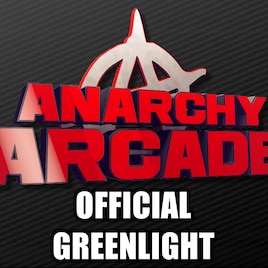 View Anarchy Arcade in the store

AArcade's all-new and improved workshop update is now live! Many Early Access users have already shared some amazing creations onto the workshop.

If you're new to using the Steam Workshop, AArcade makes it easy with a built-in packing & publishing tool! You can share individual items, or entire arcades.

To share an arcade, just load up your arcade and press the P button to open the Packing Manager. Click Pack Arcade Save and then fill out the rest of the details on the form. After that, click Publish and be patient as your workshop item uploads. As soon as it's finished, AArcade will open the workshop profile of your newly shared item in the Steam overlay.

Also new in this update is the ability to share & subscribe to nodes! Just pull the lever next to a customized wall in the map named hub_walls to save your node and share it to the workshop!

Technical Improvements
Remember that Anarchy Arcade shares media items themselves, not your copy of them. That means that it's perfectly fine to share arcades that have shortcuts to games or movies on your PC. Other people using your arcade would need access to their own copies of the games or movies to launch the shortcuts, and everybody can watch the preview videos regardless.

Last year Anarchy Arcade participated in the Indie Games For Good charity pledge drive & marathon Twitch.tv stream (http://www.iggmarathon.com/games/). Hundreds of indie games participated, and in total the event raised over $19,000.00 US for the Child’s Play charity. Pledgers were allowed to choose a game that they were most interseted in seeing played during the stream, and in the end AArcade was the 6th most requested game!

Earlier this week Valve announced that they will be introducing SteamVR hardware and a refined Steam controller at the Game Developer's Conference in San Fransisco (March 4th - 6th, 2015). This is exciting news for Anarchy Arcade users because AArcade uses the same VR integration as Team Fortress 2 itself which is devloped in-house at Valve. For more information on SteamVR, check out their announcement: http://store.steampowered.com/universe/
Read More
January Updates (Part II)
February 9, 2015 - SM Sith Lord

Map Discovery Awards
AArcade supports over 50,000 maps. Often you will load up what you believe to be the most epic map ever used in AArcade. You also might believe that you are the first person in the world to ever use this awesome map as a 3d desktop. Well now, thanks to the Steam leaderboards & AArcade's all new map discovery system, you can confirm this belief!

If you are the first person ever to load up a map in AArcade, your Steam name & avatar are for ever bound to that map in AArcade as the map's discoverer! You will be listed on the TOP of the leaderboard for the map with a special note saying that YOU discovered the map first, as well as the number of players who discovered it after you.

The landrush is on! Try to leave your mark on your favorite maps by being the first person ever to load them up in AArcade! However, you might find that you aren't the only one who loves that map. :)

Steam Leaderboards
In addition to remembering who discovered the map, the new leaderboards also record how much time each player has spent in the map (in total), how many times they have re-visited the map, as well as how many shortcuts they spawned in their arcade there.

As players, the leaderboards give you a good idea of what other players think of the map. They also help you find friends that might be interested in doing some multiplayer in that obscure addon map that only you and 3 other people have discovered so far. :)

As map authors, it shows you how many people have loaded your map and how much time they spend on it. Two stats that I would have LOVED to have back when I was publishing Counter-Strike: Source maps to CAL.

Development Extended to End of February
AArcade was supposed to be ready to come out of Early Access at the end of January; however, I saw the opportunity to add some awesome unplanned features (such as the ones covered in this article) and must extend the Early Access period to the end of February as I polish up the new features and get them release-ready.

I'd like to thank everybody who took part in December's successful Kickstarter campaign which funded AArcade all the way through January and made all of these great new features possible. As the stretch goals promised, Black_Stormy was brought on board for the month of January and produced some great new cabinet models for us as well as created the first major Hub map which will be released in February's big update. His awesome map will be the "Kickstarter Arcade" map that appreciatively displays the 2 logos of the Kickstarter patrons who pledged over $100 and brings the conclusion of the Kickstarter promises. I hope that everybody is happy with the results.

If you are an Early Access user that wishes to donate, I suggest using the in-game Donation Rewards button instead as it will grant you a couple special in-game models for using it.

Until Next Time
Don't forget that you can personally ask me questions LIVE on my Twitch stream, every Wednesday from 4am - 10pm Pacific time at twitch.tv/AnarchyArcade. I'll be happy to demonstrate how to do things in AArcade, answer any technical questions you might have, or just play vs you in some games. Have fun in your 3D desktops and party on dudes!
Read More
Description
Release date: Fourth Quarter 2014
Your PC & the internet in a MULTIPLAYER 3D world! Anarchy Arcade allows you to explore your computer from the inside as you walk around your files and the internet with your friends in a virtual 3D world.

Just like your standard desktop, you can create 3D shortcuts to absolutely anything on your PC or on the internet. Shorcuts appear as 3D cabinets that are fully customizable with HD artwork and videos that play directly on the in-game screens.

Stand in your personalized 3D media arcade with your friends and watch movies together, listen to music, play your games, browse the web, and more!

Leave Anarchy Arcade open on your gaming PC to turn it into the ultimate entertainment machine. It provides you with a completely immersive environment that is entertaining from the moment you touch the keyboard (or joypad.)
< >
859 Comments

O-spin ⯁ hexedbug Jul 9, 2016 @ 10:44am
@Enderhart: Every player's arcade save is given a score that denotes how much content is in their arcade. These scores are submitted to the leaderboard for the arcade's map. In the case of "Discovered by ____", the username filling in the blanks is just the first person who has built an arcade on the map. Your arcade isn't private; the only thing about your arcade that is sent to the server is the arcade's score!

Ender Jun 3, 2015 @ 9:01pm
What does it mean when I log on to my "House" that it says "Discovered by ____"
And it lists other people
I thought my places were priviate?!
Please someone tell me if it is not indeed priviate

Frodor Baggins Dec 21, 2014 @ 9:47pm
Open game and it is stuck in: Please wait wile required content is being downloaded by the Steam Workshop.

Okay. Dec 5, 2014 @ 10:00pm
my anarchy arcade does not work...I downloaded it and opened it but it will just show a black screen...I tried re-downloading ,restarting my computer ...everything but still can't work...when ever I press the '' `~ " button..I can see a little bit of the game's start screen like....Ary Cade ... I tried clicking around once and manage to start the game but now it does not work anymore... D=

BittenEite Sep 20, 2014 @ 6:02am
@Sm Sith Lord
I have a question on your future
Since the kickstarter has failed
when the game is out and you get some profit, are you gonna keep updating anarchy arcade to a point that you would accomplish what you were wishing to do when the kickstarter succeeds?

Anarchy Arcade has been Greenlit and is now listed in the Steam store. For the latest information, purchase options, and discussions for Anarchy Arcade, please see it on the Steam Store or in the Steam Community.
Visit Store Page
For more details Visit Community Hub
For latest discussions
If you really, really want to, you can continue to the Greenlight page. Information on this page may be out of date, since all the action has moved to the areas noted above.