Greenlight > Games > Hyde Games's Workshop
Greenlight is being retired. For more information on how to submit games to steam, refer to this blog post.
This item has been removed from the community because it violates Steam Community & Content Guidelines. It is only visible to you. If you believe your item has been removed by mistake, please contact Steam Support.
This item is incompatible with Greenlight. Please see the instructions page for reasons why this item might not work within Greenlight.
Current visibility: Hidden
This item will only be visible to you, admins, and anyone marked as a creator.
Current visibility: Friends-only
This item will only be visible in searches to you, your friends, and admins.
Nexus : One Core
Description Discussions0 Announcements2 Comments116 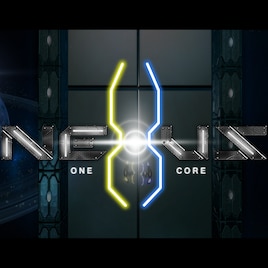 Hyde Games
Offline
See all 10 collections (some may be hidden)
Recent Announcements View All (2)
Beta Update in coming for december !
November 7, 2013 - Hyde Games

Just a little message to announce the arrival of a new version of the NeXus’ Beta which should be online in December. This version will bring some new features including:

Note that this new version will be compatible with Linux !

At the same time, here is a video of the Co-op mode. Do not hesitate to share your records and let us know if you beat the score done in this video ;)

NeXus: One Core is an arcade game for one or two players on PC in which each player controls a spaceship.
They will enter in a survival run paced by an immersive DnB Music.

Our goal with NeXus: One Core is to bring fun to the player at the moment he enters the game. The whole game is built with this philosophy. It will offer challenges demanding reflexes and sense of anticipation. Each game he will play will be different with the random level building system.

We also want to offer to players an innovative and immersive multiplayer experience. For example, the co-op mode which will launch two players in a survival run. With its fusion system, players share the control of a ship and must think together to avoid obstacles and survive.

For now, NeXus: One Core contains the following modes:
The game is still in development, so there will be more game modes to come!

Players can choose between several difficulty levels but for novices, each mode is accompanied by a little tutorial to understand the principle of NeXus.

In short, whether you are solo or with friends, skilled or not so good, surpass yourself to enter in the Top 10 and have great experience games with NeXus!

We hope you will enjoy our game. Don’t hesitate to give us your opinion by sending us an email (hydegames@live.fr).
< >
116 Comments

かいぶつ May 31, 2014 @ 3:53pm
First vertical scrolling game i voted Yes.
With guns, ennemies ( or things to destroy to pass) this could be incredibly difficult and incredibly fun, but the scale of the screen bothers me even if there's an animated wallpaper behind, a larger level design could imply more choices, more freedom, more replay-ability

Programmer Apr 26, 2014 @ 8:55pm
Nice music, but the game play seems repetitive, and I don't have a azerty keyboard - conclusion: no, thanks

The Mattverick Apr 19, 2014 @ 5:03am
Look very interesting and unique, while still being challenging. I would definitely consider this game if it was released on Steam.